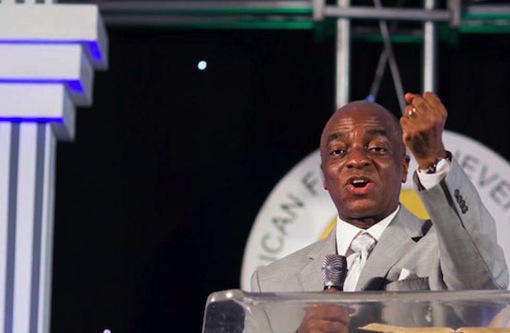 
Fifty-five countries across the globe were represented at the annual Living Faith Church (Winners Chapel) prayer convention held at Canaan Land in Ota, Ogun.
Bishop David Oyedepo, the President and founder of the church disclosed this on Saturday at the close of the five-day prayer convention titled: “Shiloh 2015’’.
A News Agency of Nigeria (NAN) correspondent, who monitored the live telecast of the programme in Abuja reports that Oyedepo appreciated God for the successful conclusion of the convention.
The clergy disclosed that delegation from the foreign nations to the camping ground was more than 3,000.
Oyedepo said that from the church records, more than one million worshippers participated in the convention at various local churches telecast centres across the globe.
He said that the church would embark on the construction of a multi-million naira “Faith Theatre’’.
The project, according to the clergy is “novel’’, and will have a 100,000 seating capacity-auditorium.
NAN reports that in a three minutes video clip of the architectural design of the project, it contained shopping malls, modern camping accommodation, fuelling station, car parks, bookshops, baptismal pool, among others.
The clergy expressed the belief in God that the project would be completed in good time.
He recalled that the church had recorded a similar feat in 1999, with the construction of its present site with a 50,000 capacity auditorium within 12 months.
The clergy also disclosed that the next year prayer convention would hold from Dec. 6 to Dec. 10.
Meanwhile, at least 1,000 residents of Jos South Local Government in Plateau on Saturday besieged the Living Faith Church, Rantya, Plateau, for the closing events of Shiloh 2015.
NAN reports that most of the residents that attended the event also beamed live via telecast from Ota, Ogun State to the satellite church in Jos, testified to healings of various health issues.
Oyedepo had decreed the rise of Nigeria and other African nations in world affairs and had predicted an end to mindless bloodletting globally.
He said that expectations in some quarters that Nigeria would disintegrate would not come to pass.
Oyedepo announced that soon African nations would be listed among some of the top nations of the world.
He said that this would happen because of the revivals taking place in Christendom in Africa arising in more mega churches in the continent.