Outrage over killing of Nigerian housewife in South Africa 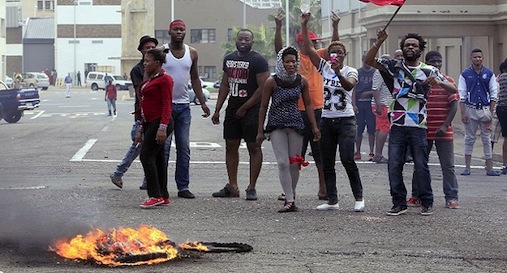 Nigeria Union in South Africa has condemned the killing of a 34-year-old housewife, Mrs Christiana Onyeka, by unidentified gunmen on Dec. 3.
Onyeka, a mother of four and native of Ozubulu, Ekwusigo Local Government Area of Anambra, was killed in her husband`s office in Midrand, near Johannesburg.
Mr Ikechukwu Ayene, the President of the union, told the News Agency of Nigeria (NAN) in Midrand, South Africa, on Saturday that it had reported the incident to the South African police and Nigerian mission.
“The unjust killing of Nigerians in South Africa is becoming alarming.
“We are worried that after reporting such killings to the police, we do not get the desired results. Most cases of Nigerian victims of murder are either abandoned or inconclusive,“ he said.
Anyene said that the situation had become so bad because more women were getting killed.
“Nigerian communities in South Africa are devastated by this gruesome murder. Mrs Onyeka was a hard working housewife, dedicated to the success of her husband`s business and welfare of Nigerians in South Africa,“ he said.
Mrs Uzor Ekesi, the President, Nigerian Women Association, South Africa, decried the killing of Onyeka by unidentified gunmen.
“The killing came to us as a big shock. We are scared and confused because women are now being killed.
“ Nigerians, especially women, condemn this act and call for urgent action to stop further killings,“ she said.
She said that Onyeka was an active and dedicated member of the association.
A patron of the association, Mrs Grace Aniegboka said that Nigerian women had embarked on a seven-day fasting and prayer session to seek divine intervention on the incident.
“Our reaction has been that of shock and disbelief. We pray God not to allow this incident or killing of Nigerians happen again,“ she said.
Christiana`s husband, Chief Onyekachi Onyeka, also the President of Anambra State Associations in South Africa, said he was still in shock and could not speak.