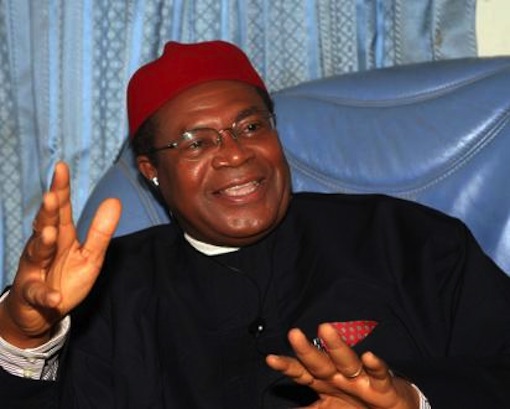 The former National Chairman of the PDP, Dr Okwesilieze Nwodo, has noted that the immediate past government in Nigeria led by Goodluck Jonathan has reached the point of impunity.

Nwodo who urged Nigerians to have faith in President Muhammadu Buhari, stated that the former military dictator needs time to implement his campaign promises.

Nwodo told newsmen in Umuahia that the president needed time to formulate policies and execute programmes to tackle the myriads of socio-economic challenges currently plaguing the nation.

“The president came in with tremendous goodwill. It’s not easy in the Third World for an opposition party to defeat a sitting government,” he said.

“So for Buhari to have done that shows the measure of goodwill he came to office with.

“Secondly, I believe that what he promised our people was something that was timely; I’m of the PDP but that government had reached a point of impunity.

“The level of impunity is being shown by the investigations that are going on indicating that we needed somebody who promised us that he was going to fight corruption and to bring sanity to government expenditure.

“I’m one of those who believe that no Nigerian should go to bed hungry and that this country has enough resources to feed us and to provide enabling environment to achieve our God-given talent.

“But when government’s resources are so plundered as they have been done by other administrations, you can see that the waste in governance has made it impossible for Nigerians to reach their manifest potential.

“So when a president is coming on board and promises that he is going to fight corruption and people voted, so these are the two big credentials that the president came on-board with.

“They are not things that can be achieved overnight. The problem is that we have suffered so long that Nigerians have become impatient.

“They want to be removed from the fire they are in today by tomorrow but government doesn’t work like that.

“It takes time for policies to be formulated and to be implemented, so what I want to plead with Nigerians is to give the president time.

“I believe he has brought in a solid team of ministers to help him and this is the time the work now starts.

“Let’s pray for him, let’s wish him the best and hope that he will be able to fulfil those promises he made to us.”

Nwodo also canvassed the need for the Federal Government to implement the report of the National Conference, saying this would help to reduce social tension in the country.

He further said that the report of the conference, if implemented, would enthrone and strengthen true federalism in the country, saying that Nigeria was currently practising a unitary system in a federation.

Nwodo also said that true federalism would ensure competitiveness and self-reliance among the federating units, adding that under the defunct regional system, the regions and the country fared better.

He expressed regrets that the sharing of monthly allocation from oil revenue had discouraged the states from harnessing other natural endowments.

Nwodo, a former governor of Enugu State, urged state chief executives to look inwards on how to enhance their internally generated revenue.

He commended the current efforts of the Federal Government toward reviving the moribund refineries and building new ones.

The country, he said, would continue to experience scarcity of petrol as long as it relied on importation to meet local consumption.

Nwodo, who was conferred with the Honorary Doctor of Science degree by Michael Okpara University of Agriculture, Umudike, Abia on Saturday, advocated the setting up of Education Trust Fund at the state and local government levels.

He said that such an initiative would complement the Federal Government’s efforts in tackling the infrastructure deficit in public schools in states and local government areas.