Newcastle down Tottenham to leapfrog Chelsea 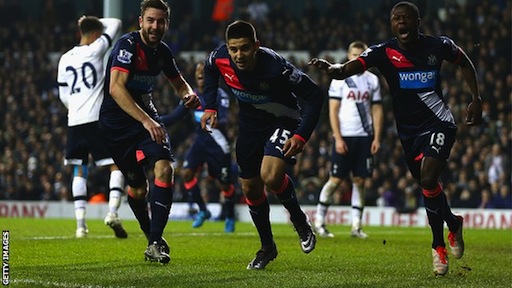 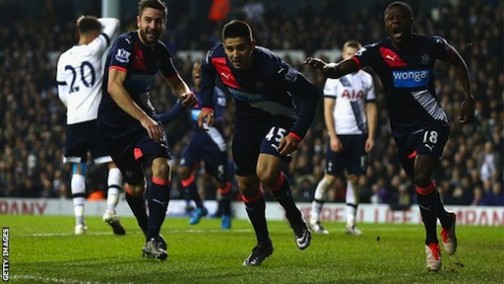 Substitute Ayoze Perez scored three minutes into stoppage time as Newcastle came from behind to beat Tottenham and move out of the relegation zone.

Dier was unmarked when he glanced home Christian Eriksen’s corner.

Newcastle levelled when substitute Aleksandar Mitrovic tapped home after a scramble inside the six-yard box before Perez struck deep into stoppage time.

Tottenham, who would have climbed above Manchester United into fourth spot with victory, are now without a league win in three games.

Can Newcastle stay up?

Steve McClaren and his Newcastle players were facing another bad day when the Magpies defence forgot to mark Dier, who glanced home his third goal of the campaign six minutes before the interval.

Elliot had already made two excellent saves to keep out Lamela and the Newcastle keeper later denied Harry Kane.

Yet the visitors showed spirit and desire – ingredients missing for long spells of the season – to produce a victory that had appeared very unlikely.

They were rewarded for their persistence 16 minutes from time.

Mitrovic, who had only been on the pitch two minutes, bundled an equaliser after Toby Alderweireld and Hugo Lloris failed to clear Chancel Mbemba’s header.

Perez sealed a dramatic finish when he sneaked inside Jan Vertonghen before striking the ball past Lloris at the near post.

Tottenham’s first defeat since the opening day of the season will not trigger any alarms at White Hart Lane.

But boss Mauricio Pochettino will be concerned at his side’s failure to kill off teams. Three times in their past five league games Spurs have taken the lead and not won.

The defending for both Newcastle’s goals left a lot to be desired, but Spurs should have doubled their lead before Newcastle scored their first.

As well as Elliot performed for the visitors, Danny Rose and Kane were guilty of missing good chances.

Pochettino takes Spurs back to his former club Southampton on Saturday before they entertain Norwich City on 26 December.