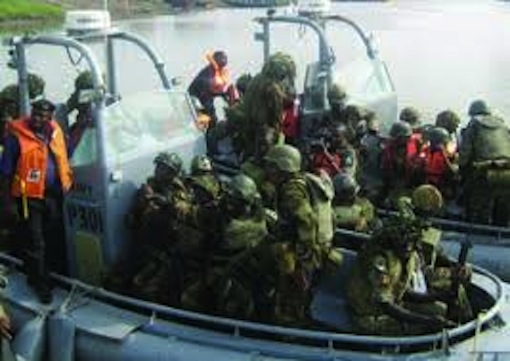 The Bayelsa Restoration Campaign Organization, RCO, working for Governor Seriake Dickson has taken a swipe at the Joint Military Task Force (JTF) for absolving itself of any blame in the violence and malpractices which marred the recent election in Southern Ijaw, saying JTF could have done better to forestall the violence that led to the cancelation of the election.

The group also rejected the position of the JTF on being neutral, accusing it of colluding with others to rig the election.

RCO also alleged that General Stevenson Olabanji, Commander, 2 Brigade of the Nigerian Army, had at a news briefing in Yenagoa last Saturday, regretted the violence during the election and claimed the JTF made a number of arrests, just as he stated that Governor Seriake Dickson’s visit to Oporoma on election day fuelled violence in the area.

But, in a statement Sunday, RCO’s Director of Publicity, Jonathan Obuebite, blamed the JTF for the security lapses leading to loss of lives in Southern Ijaw, because it did not heed advice by the governor and others to postpone the election on account of anticipated violence.

He condemned the JTF, accusing the Army of partisanship, alleging that its officers and men worked with thugs loyal to the All Progressives Congress (APC) to undermine the entire electoral process in Southern Ijaw.

“It is only fit and proper for the JTF to own up to its failures and apologize to the people of Southern Ijaw for the despicable and unprofessional conduct of some of its officers, who clearly were more interested in lining their pockets. It failed to give reasons why it withdrew the military security attached to the governor and giving order for them to be detained, thereby compromising the security of the governor,” he stated.

Even while the Governor’s political group commended the JTF on some of its efforts, nonetheless it said they fell short of expectation of the people.

“We expected the JTF to have done much more, knowing full well reports of arms build-up by the APC leading up to the election. The JTF should have adopted a proactive approach by deploying superior intelligence to track down the movement of arms by APC thugs and arresting same long before the commencement of the elections,” RCO said.

According to Obuebite, the JTF failed to acknowledge that it erred by not heeding the advice of the Governor and others, including women, NYSC members and INEC ad hoc staff to postpone the election and in spite of the gun duel it had with the militants and miscreants all through Friday night up till the morning of Saturday, which, he said, necessitated a shift in election.

He noted that, even on Sunday, the day of the rescheduled election, security concerns were still at an all-time high, a development which prompted the governor as the Chief Security Officer to visit Oporoma to see things for himself, adding that he acted well within his rights and out of genuine concern.

According to the political group, “unfortunately the JTF lied that the governor’s presence further heightened security in the area. That’s so cheeky and it only clearly shows that the military was indeed compromised. The governor went to Oporoma, headquarters of Southern Ijaw LGA, out of genuine concern for the security of lives of the citizens. He went there as early as 7am long before the commencement of election.”

While applauding the gallantry and professional conduct of some of its officers during the elections, which led to the arrest of some thugs and hoodlums, he challenged the JTF commander and Commissioner of Police to reveal the identity of those arrested and their sponsors.

“Much as we applaud the efforts of the JTF and the police in effecting the arrest of some suspects and parading same to newsmen, they should have gone a step further to reveal the identities of those arrested and the big wigs in the APC, who sent them. Or better still, they should have allowed journalists to interview the suspects arrested to ask them who sent them. The public deserves to know, so as to be sure where to appropriately apportion the blame,” Obuebite said.