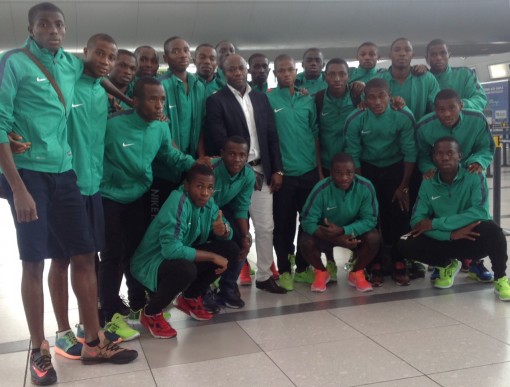 Coach Emannuel Amuneke and the Eaglets after their arrival in Santiago, Chile, for the U-17 World Cup which they won

Six Nigerians were on Monday in Abuja, Nigeria shortlisted for 2015 Glo-CAF Awards by the Confederation of African Football (CAF).

Also released were the names of the top three players competing for the prized crown of African Footballer of the year Award.

The Confederation of African Football, organisers of the most prestigious annual African footballer of the year award and its exclusive sponsor, Globacom, the Next Generation Network, announced the names at a joint press conference held at Sheraton Hotel and Towers, Abuja on Monday.

CAF also released names of top three finalists for the Africa-based ‘Player of the Year’ Award. They are: Mbwana Aly Samatta of Tanzania and TP Mazembe, Baghdad Bounedjah of Algeria and Etoile du Sahel and Robert Kidiaba of Dmocratic Republic of Congo and TP Mazembe.

The list was prepared through a vigorous selection process by the Technical, Football and Media Committees of CAF, taking into account the performance of the players for their national teams and clubs from January to November of each year.

The list also include the nominees for other categories of the Awards. Shortlisted for Women Player of the Year are the duo of Gabrielle Onguene and Gaelle Enganamouit of Cameroon, Ngozi Ebere of Nigeria, N’rehy Tia Ines of Cote d’Ivoire and Ghana’s Portia Boakye while the Youth Player of the Year nominees has Adama Traore of Mali, Kelechi Nwakali of Nigeria, Samuel Diarra of Mali, Victor Osimhen of Nigeria and Yaw Yeboah of Ghana as nominees.

Nominees for the Coach of the Year Award are: Baye Ba of Mali Under 17 team, Emmanuel Amuneke of Nigeria’s Under 17 team, Fawzi Benzarti of Etoile Sportive du Sahel, Herve Renard of Cote d’Ivoire and Patrice Carteron of TP Mazembe, while Azubuike Okechukwu of Nigeria, Djigui Diarra of Mali, Etebo Oghenekaro of Nigeria, Mahmoud Abdelmonem of Egypt, and Zinedine Ferhat of Algeria were shortlisted for the Most Promising Player of Year Award.

Five referees including Alioum of Cameroon, Bakary Papa Gassama of Gambia, Eric Arnaud Otogo Castane of Gabon, Ghead Zaglol Grisha of Egypt and Janny Sikazwe of Zambia will compete for the Referee of The Year Award.

The prestigious Platinum Award will be presented to President Muhammadu Buhari of Nigeria for being the host President and for his passionate commitment to the development of football.

The Glo-CAF Awards gala has become one of the world’s most iconic sports awards ceremonies, providing Africa with a reputable forum for recognising and rewarding excellence in the various departments of football.

Globacom Limited and CAF have been in partnership for the past eleven years, and have worked together to make the African Best Football Player Awards glamorous, thereby stimulating the growth of African football.

Globacom’s Business Director, North West, Mr. Kemi Kaka who represented the company at the occasion, said that “This is the eleventh year of Glo-CAF partnership and we at Glo take pride in the significant strides our alliance with CAF has achieved in raising the quality and popularity of football in Africa.”

Kaka said: “Globacom will continue to use its clout in sports sponsorships in Africa to encourage people in sports, African Culture and business to excel.”

The King will be crowned at the Awards Night holding at the International Conference Centre, Abuja on 7th January, 2016.