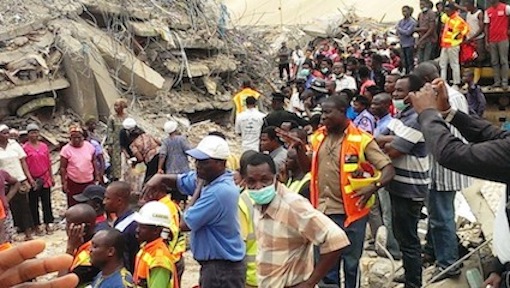 Scene of the Synagogue building collapse

The Council for Regulation of Engineering in Nigeria (COREN) says it will go ahead with hearing into the case of two engineers indicted by the Lagos Coroner over the collapse of a Synagogue Church building in Lagos.

The Chairman of the COREN-Registered Engineers Investigation Panel, Mr Nurudeen Rafindadi, said this at the maiden hearing in Abuja on Monday.

NAN reports that the six-member panel had invited the two indicted engineers, Oladele Ogundeji and Akinbola Fatiregun, to appear before it over professional negligence which led to the building collapse.

Although the two respondents were absent at the panel’s proceeding on Monday, their lawyers presented a court order on the issue.

However, the chairman said that the panel was not bound by the court order since it was not listed among the parties restrained in the suit.

The chairman said that the panel’s main assignment under the COREN Order was to investigate alleged professional misconduct against the two registered members.

Rafindadi said that the cases pending in the Lagos High Court were criminal matters which had no bearing with the mandate of the panel, adding that the injunction, therefore, did not restrain COREN from investigating the duo.

“COREN has the powers to investigate the professional conduct of our members.

“This panel is calling for investigation in pursuance of the mandate of COREN as contained in the Engineers Registration Act Cap E-11, Section 1(b).

“It is an open investigation based on fair hearing, to investigate alleged misconduct by a professional colleague who is a licensed engineer.

“This is really a parallel proceeding; it does not stop the criminal proceeding.

“It is simply to determine whether a member has professionally conducted himself in line with COREN Orders.

“The court injunction does not restrain COREN from holding an investigation as to the professional conduct of the two engineers.

“So, in view of the foregoing, we find nothing precluding this panel from continuing its investigation, which by its nature, is a professional conduct investigation.

“We hold that it is our obligation to continue with the case. We don’t think whatever we are doing here is prejudicial to any case pending in court.

“So, we therefore, request the two engineers to appear before the panel on a date to be communicated,” the panel ruled.

Counsel to the two engineers, Mr Oluseun Abimbola, had earlier said the respondents could not appear before the panel on the grounds that the matter was already pending in a Lagos High Court.

Abimbola argued that the notice of appeal filed by the two respondents against the Coroner’s verdict of indictment was also pending before another Lagos High Court.

He also stated that COREN did not give his clients fair hearing because it had made a written submission at the Coroner’s Inquest, concluding that the respondents were guilty of negligence.

He submitted that the COREN panel could go ahead with the hearing while the matter was still a subject of litigation in the court of competent jurisdiction.

“Lagos State has also instituted criminal proceedings in which the two respondents and some companies are being charged for manslaughter; the outcome of which could affect the hearing of this panel.

“COREN had also made a conclusive submission during the Coroner’s Inquest that the building collapsed due to negligence by the engineers.

“So, if COREN has taken a decision, it will be unfair for it to summon the respondents when it (COREN) has already established their culpability.”

The panel, however, rejected the respondents’ argument, maintaining that the panel has the power to investigate the two engineers for professional misconduct and negligence.

NAN reports that the two engineers were indicted by the Coroner’s Inquest for alleged criminal negligence over the September 2014 collapse of the Synagogue Church of All Nations’ building which killed 116 persons.