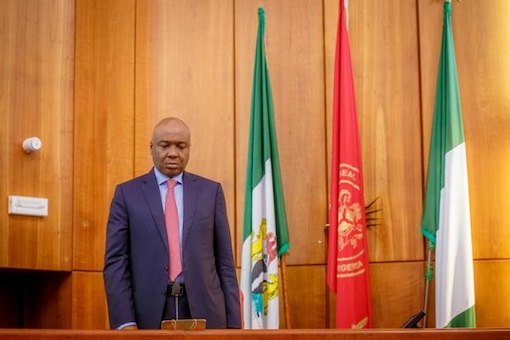 The Federal High Court in Abuja on Monday reserved judgment in a case challenging the election of Senators Bukola Saraki and Ike Ekweremadu as Senate President and Deputy Senate President respectively.

Justice Adeniyi Ademola made the pronouncement after counsel to the parties adopted their written addresses.

The News Agency of Nigeria (NAN), reports that Senators Abu Ibrahim, Kabir Marafa, Robert Boroffice and Sulieman Hunkuyi filed the suit challenging the process that led to the elections of the two principal officers.

NAN further reports the Clerk of the National Assembly and that of the Senate are also listed as respondents.

The plaintiffs are seeking a declaration that the Senate Standing Order 2011 (as amended) was the valid and subsisting Standing Order of the 8th Senate.

They are also seeking declaration that the Senate Standing Order 2015 (as amended) not being a product of any legitimate amendment pursuant to the extant provision of rule 110 of Senate Order, was illegal.

They also want a declaration that the election of Saraki and Ekweremadu as President and Deputy Senate President pursuant to Senate Standing Order 2015, was illegal.

The plaintiffs, therefore, prayed the court to hold that the processes were carried out contrary to the provisions of Rule 3 (3) (e) and (k) and Chapter two of the Senate Standing Order 2011 (as amended).

Consequently, they sought an order setting aside the purported elections of the two most senior principal officers.

They had further sought an order directing the 8th Senate to elect a presiding officer in accordance with the provision of Section 54 (1) of the constitution.

Furtherance to the reliefs, Chief Mamman Ousman (SAN), counsel to the plaintiff held that his clients had the “locus standi’’ to institute the action.

He also submitted that the plaintiffs were senators that were directly affected negatively by the “shoddy’’ process and outcome of the election.

On the jurisdiction of the court to hear the suit, Ousman said that the legislative immunity of the National Assembly did not extend to violation of the Senate Rules and the Constitution.
“The court has the power to interfere when statutorily laid down procedure of doing an act is breached. In fact, the constitution does not provide for legislative immunity.
“The legislative immunity is provided by legislative Act. This Act only relates to spoken words and written words.
“Meanwhile, the complaint relates to a particular period preceding the session of the plenary that the act was done’’, he said.
On his part, Mr Kayode Aleja (SAN), counsel to Saraki and Clerk of the Senate, said the plaintiffs were interlopers and therefore, lacked the requisite jurisdiction to initiate the suit.

Aleja said “it will amount to interference should the court arrogates jurisdiction to itself to decide this matter’’.

Arguing on a point of law, Aleja said counsel to the plaintiffs misappropriated fact and law to submit that the Senate Standing Order had the flavour of the Constitution.

“The suit is simply a complaint that focuses on the alleged breach of the Senate Rules and has nothing to do with the Constitution.

“The Senate Standing Order is a document that regulates activities of the Senate and this is subject to change or amendment as they progress. It remains a distinct rule,’’ he said.

NAN reports that Mr Ikechukwu Ezechukwu (SAN), counsel to Ekweremadu, in aligning himself to Aleja’s submission, said the Senate Standing Order was made pursuant to the constitution.

However, he said the document remained an independent set of rules that must not be subjected to test by the court.

“Any attempt to do this will mean the usurpation of the power of the legislative arm of government by another arm. The court must refuse the invitation to do this’’, he said.

NAN reports that Miss Nancy Odimegwu, counsel to the Clerk of the National Assembly aligned herself with the submissions of both Aleja and Ezechukwu.

She, therefore, urged the court to dismiss the, suit against her client for lack of merit