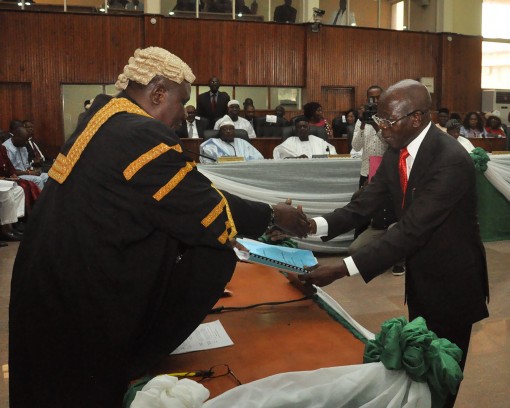 Governor Adams Oshiomhole presenting the state's 2016 Budget to the Clerk of the State House of Assembly. 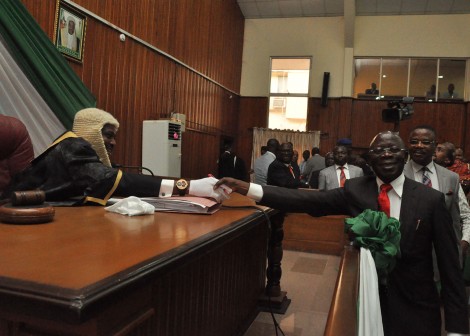 Edo state governor, Adams Oshiomhole on Monday presented the state’s 2016 budget of N111.5 billion to the state House of Assembly for consideration and approval.

Oshiomhole, while presenting the budget, said the “reduction is in line with current economic realities, especially developments in the international oil market and the dwindling inflows from the Federation Account.”

He said the policy focus of the Year 2016 Budget is the completion or near completion of on-going road construction/rehabilitation projects across the state, noting that roads at various stages of completion will be accorded priority.

A breakdown of the budget shows that Education and Health sub-sectors take the lion share of the budget with N14 billion each followed by roads infrastructure at N9.24 billion and flood and erosion control at N8 billion.

“The designs of Flood and Erosion Control Structures for Gapiona/Adesuwa Grammar School road to de-flood the Western part of the Benin City GRA, covering about 9 square kilometres is at advanced stage. Also designs for Urora Community in Benin City and Igbe Quarters in Auchi are being carried out.”

On funding for the budget, Governor Oshiomhole said: “it is now a common knowledge that given the vagaries in the international oil market, we can no longer depend on the revenue from federal sources to implement our development agenda.

“Therefore, it is imperative for this administration to look inward through expansion of our internal revenue base. In Year 2016, focused attention will be given to the actualization of new revenue sources such as the Land Use Charge and the automation of revenue collection process via the implementation of Integrated Tax Administration System (ITAS).

“It is our desire to sustain the sensitization of our people to see the need for prompt payment of taxes in order to execute the laudable people-oriented programmes/projects of this administration. On our part as Government, committed to the principles of transparency and accountability, let me assure you that we will make judicious use of all revenues at our disposal. While we remain true to our pledge, I wish to appeal once again to all and sundry not to politicise this important issue that borders on civic responsibility and our collective survival as a state and as a people.”