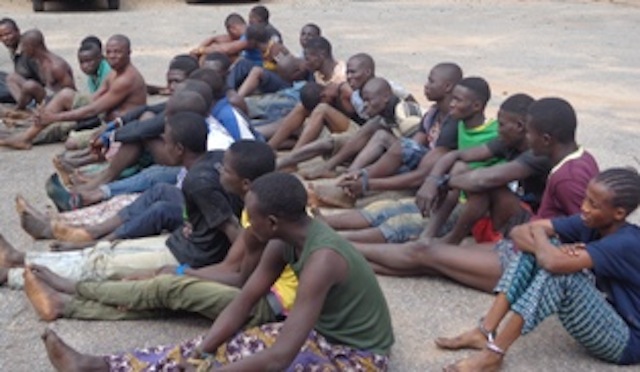 The were, however, granted an option of paying N20 million each by a Federal high court sitting in Lagos, western Nigeria.

Their vessel MT Asteris, was also ordered to be forfeited to the Federal Government of Nigeria together with the crude oil on board of the vessel.

The four-count criminal charge number FHC/L/239C/15 was filed before the court by the Head Legal and Prosecution Department of Economic and Financial Crimes Commission (EFCC), Gbolahan Latona.

In the charge it was stated that the convicts on or about 27 March, 2015 in Lagos within the jurisdiction of the Federal High Court conspired among themselves to commit an offence to wit: dealing in 3,423.097metric tons of crude oil without lawful authority or appropriate license and thereby committed an offence contrary to section 1(19)(6) of the miscellaneous offence Act, Cap M17, Laws of the Federation of Nigeria 2004 and punishable under section 17 of the same Act.

It was also alleged that the accused on the same day and time within the jurisdiction of the court without license stored 3, 423. 097 metric tons of crude oil in MT Asteris’ cargo tanks marked 1C, 3C and 4C and thereby committed an offence contrary to section 4 of the Petroleum Act, Cap P10, Laws of the Federation of Nigeria 2004.

In the course of their trial, they all pleaded not guilty to the charge levelled against them.

After their pleas were taken, the defence counsel, Femi Adegbite applied for their bail and the prosecution did not oppose it.

The trial judge, Justice Buba granted them bail in the sum of N50 million each with one surety who must be Nigerian, must provide evidence of means and will also deposit their international passport with the registrar of the court.

The EFCC prosecuting counsel Rotimi Oyedepo called seven witnesses and tendered many. exhibits to prove his case while the accused testified for themselves.

The accused after rigorous trial were found guilty by the court.

In his judgement the presiding judge, Ibrahim Buba said the convicts were part of the saboteurs that have turned Nigeria into a laughingstock among the comity of nations, adding that Nigerians and non Nigerians must respect Nigeria and its laws.

Consequently, Justice Buba sentenced the convicts to five years on each counts of the four counts with option of five milion aaira fine on each count.

The sentences are to run concurrently.