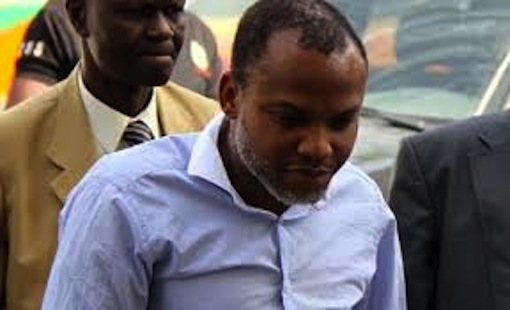 The Federal High Court in Abuja on Monday fixed Dec.17 to rule on a bail application for the detained leader of the “Indigenous People of Biafra”, Nnamdi Kanu.

NAN reports that Kanu, who is also the Director of the Pro-Biafra pirate radio, has been in detention for 90 days.

Mr Vincent Obeta, counsel to Kanu had approached the court to grant his client bail.

Obeta said the State Security Service (SSS), had abused court process by refusing to honour the bail order of a Magistrates’ Court in Abuja.

Obeta, who filed a Fundamental Rights suit against the SSS, held that Kanu’s liberty was being trampled upon when an earlier Magistrates’ Court bail condition was perfected.

“My lord, Kanu has spent exactly 90 days in detention today. This action contravenes the Constitution and the African Charter on Human Rights.

“We have indeed perfected the bail condition as directed by the Magistrate Court but to no avail.

“The lower court has also ordered that Kanu be transferred to the Kuje Prisons but the authority refused to heed the
order of the court. That is why we have approached this superior court for justice,” Obeta said.

The prosecutor, Mr Moses Idakwo, asked the court to disregard the bail application by Kanu’s counsel.

Idakwo argued that Kanu should not be granted bail as the allegations against him were terrorism-related.

He said the SSS had evidence of bank accounts owned by Kanu, where monies (in dollars and pound sterling) were used for financing terrorism against Nigeria.

Idakwo also said the applicant had dual citizenship of Britain and Nigeria and therefore could flee justice if granted bail.

He further said the bail conditions issued by a Magistrate Court were yet to be perfected by the applicant.

The judge, Adeniyi Ademola, said “having listened to both parties, I shall be ruling on the application on December 17.”