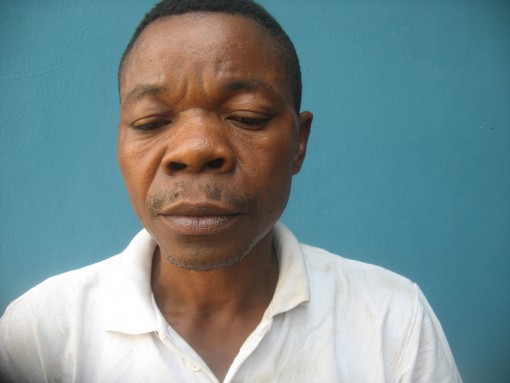 Akinwale whose wife and daughter were rescued from kidnappers

The police at Alakuko Division have rescued a woman Mrs. Oluyemi Ogunmuyiwa and her daughter Miss Oreoluwa Ogunmuyiwa from kidnappers.

Mr. Ogunmuyiwa Akinwale told our reporter that he was taking his family to the church around 8am on the fateful day when a commuter bus with three occupants hit his vehicle from behind and as he stopped to find out the extent of damage done to his car, the driver of the bus who gave his name as Olarewaju Makinde and the other two occupants of the bus told him that he should follow them to the mechanic to repair the car.

Sensing that they might escape on their way, Mr. Akinwale said he asked his wife and daughter to enter the bus while he followed them from behind.

“To my amazement the speed at which the bus was going made me to suspect some foul play and as I tried to catch up with them, I ran into a ditch and one of my tyres burst. So, I stopped one okada (commercial motorcyclist) while I was shouting kidnappers and to the glory of God the police showed up and assisted me to chase them to Idiroko area where my wife and child were rescued.

“Two of the kidnappers escaped while one was arrested. I really thank the police for their effort in rescuing them for me,” Akinwale explained.

When our reporter visited Alakuko Police Station, the bus was seen parked in the station and when contacted, the Divisional Police Officer in charge of Alakuko Mr. Ajayi Abayomi, a superintendent of police whom our reporter learnt led the rescue operation, declined to speak on the incident and directed him to the Lagos State Police Image Maker Mr. Offor.
When contacted, Offor, a Deputy Superintendent of Police (SP) promised to get back to our reporter but never did as at the time of writing this report.