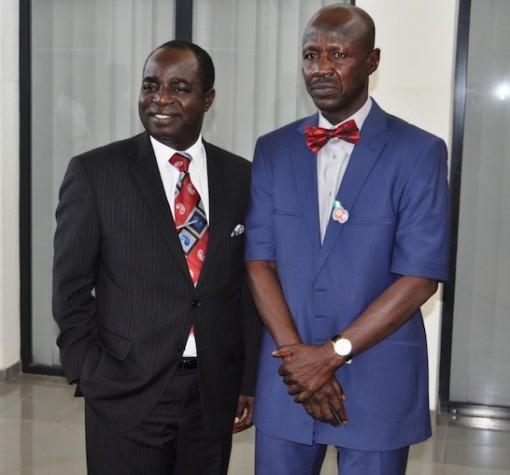 The House of Representative is resolved to fully support the Economic and Financial Crimes Commission in its determined efforts to tackle corruption and economic crimes in Nigeria.

Chairman House of Representatives Committee on Narcotics, Financial Crimes and Anti- Corruption, Hon. Kayode Oladele gave this indication Tuesday, during an interactive meeting with the Acting Chairman of the EFCC, Ibrahim Mustafa Magu at the National Assembly Complex in Abuja.

Oladele said the House of Representatives and the Committee are determined to partner with the Executive to ensure significant reduction in incidents of financial crimes in Nigeria.

“We are conscious of the growing need of anti-graft agencies in a rapidly evolving information age. Most transactions now take place on electronic platforms, and sophisticated networks of corporate, terrorist and political elements are now having convergent interests in keeping their illicit money and in perpetrating most economic crimes. This places additional pressure on our anti- graft agencies in understanding and smashing these networks.

“Within the limited resources available, this committee shall give the required support to the EFCC in ensuring that the agency is well equipped to undertake top-notch investigation and prosecution,” he said.

Responding, Magu thanked the Committee for the warm reception and show of support. He said he is convinced that, under his leadership the Commission will benefit from the wealth of experience of members of the Committee. He also urged the Committee to leave its doors open for him as he will be coming from time to time for advice and suggestions from them.

“I will be counting on your advice and suggestions as we partner in this difficult task of freeing our nation from the grip of corruption. I will also be counting on your support to overcome some of the challenges which we face in the discharge of our duties.”

He urged the committee to intervene in the completion of the Commission’s proposed head office which he said, will address the serious office accommodation problem faced by the Commission.

Magu who was accompanied on the visit by the Secretary to the Commission, Emmanuel Adegboyega Aremo and other members of the EFCC management team, thanked the Committee for the vote of confidence in the Commission. He promised that the Commission will do its best in ensuring that the fight against all forms of graft in the country is taken to a higher level.

Other members of the Committee present include: Hon. Goodluck Obia who is the deputy chairman of the committee, Hon. Danladi Baido, Hon Rufai Ahmed Chanchangi amongst others.