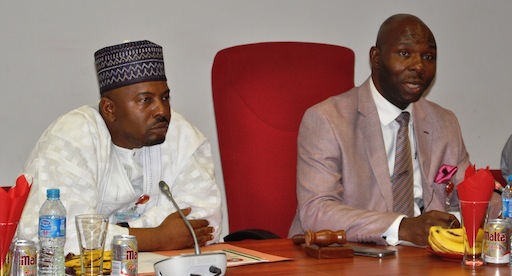 The senate on Monday, December 14 pledged its support for the ongoing fight against corruption in Nigeria. Chairman Senate Committee on Anti-corruption and Financial Crimes, Senator Chukwuka Utazi made the pledge when the committee received the acting Chairman of the Economic and Financial Crimes Commission, Ibrahim Magu.

He said the senate fully supports the anti- corruption programme of the Muhammadu Buhari administration and promised to work closely with the Commission to overcome its challenges and ensure that it lived up to the expectation of Nigerians. “It is a daunting job, at times thankless but we have to make sure this country is good, and good for our children. The journey must start now,” Senator Utazi said

He equally advised the EFCC to refocus its anti-graft strategy by de-emphasizing enforcement activities in favour of prevention. “We have to get it right now that we have a new chairman at the EFCC and we won’t dissipate energies moving from one court to another,” he said.

Senator Utazi empathized with the Commission regarding the excruciating accommodation challenges facing it. “You shouldn’t be staying in makeshift offices. We will visit soon to see things for ourselves,” he declared.

In his response, the EFCC boss thanked the Committee for the warm reception and interest in working closely with the Commission. “I am encouraged by what you have told us and we are equally ready to work with your committee,” he said.

He equally thanked the committee for showing interest in the accommodation problems confronting the Commission. He said the Commission currently has offices scattered around Abuja while its head office building which is under construction, is about 70 per cent completed.

The high point of the meeting was the presentation of some information materials including past copies of the Commission’s Annual Reports to the Committee.

Senator Utazi thanked the EFCC chair for responding positively to their request for information.

Other members of the Committee that witnessed this maiden meeting with the new EFCC Chairman were Senator Isah Hamman Musa and Senator Mustapha Mohammed, who is the vice chairman of the Committee.