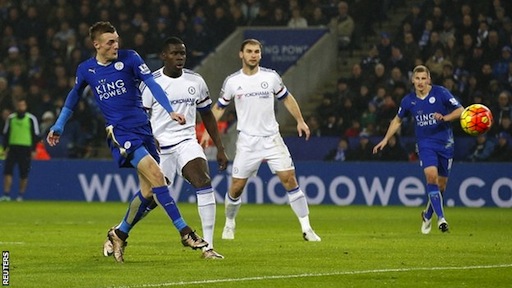 Cool As You Like: Jamie Vardy puts the league leaders in the lead

Leicester City returned to the top of the Premier League and increased the pressure on Chelsea manager Jose Mourinho with victory at King Power Stadium.

Jamie Vardy’s 15th goal of the season put Leicester ahead before half-time and Riyad Mahrez’s brilliant curling strike just after the break sealed the win for Claudio Ranieri’s side.

Chelsea substitute Loic Remy pulled one back but Leicester survived in relative comfort to move back ahead of Arsenal and Manchester City at the top of the table.

The reigning Premier League champions, in contrast, lie just a point off the relegation zone in 16th place with Mourinho fighting for survival.

The ‘Tinkerman’ torments the ‘Special One’

Ranieri has been in Mourinho’s shadow from the time he was succeeded at Stamford Bridge by “The Special One” in 2004 and relations between the pair have often been fractious.

They are more cordial now – but how the 64-year-old, hugely popular Italian will have enjoyed the sweet taste of victory against his former club on Monday.

Chelsea have looked lethargic on many occasions this season but rarely have they looked as ragged, pedestrian and off the pace as they were against the Foxes.

From the first whistle the pace and movement of Jamie Vardy and Riyad Mahrez immediately exposed John Terry, in particular, in the style that has troubled so many teams on Leicester’s remarkable rise to the top.

As Leicester pressed and pushed, Chelsea retreated on to the back foot. Ranieri’s side looked high on confidence and adrenalin, the reigning champions fearful and tentative.

It was barely believable that only seven months ago Chelsea were crowned champions and Leicester were pulling off a remarkable escape from what looked certain relegation. This night underscored what has been a remarkable role reversal this season, and ensured Leicester’s best start to a top-flight season in their 131-year history.

How much longer can Mourinho survive?

The Premier League title and credit in the bank means Mourinho has been afforded far more patience than is customary by owner Roman Abramovich.

Leicester deservedly inflicted a ninth loss in 16 games on Chelsea at a thunderous King Power Stadium and with suggestions Mourinho could ill-afford to lose either here or against Porto in the Champions League, he has surely been pushed closer to the edge.

Mourinho has said Abramovich would not “change with the wind” – but it is firmly blowing against the Portuguese now and he will need something out of character with Chelsea’s season to survive.

He may be getting a stay of execution because there is no natural heir apparent or guarantee of improvement – the currently unemployed Carlo Ancelotti having already experienced a sacking at Abramovich’s hands.

It is highly unlikely, and against all his natural instincts, that Abramovich will let this continue. And with the prospect of any European football of any kind next season receding, the clock must be ticking.

Time up for John Terry?

John Terry has been the bedrock of all Chelsea’s modern-day successes – but the centre-back looked old and fraying at the edges in the face of the pace, verve and movement of Vardy and Mahrez.

He was not alone as they threatened to run Chelsea’s defence ragged and Terry being replaced by Cesc Fabregas after only 53 minutes was a sign of the times, not just of this night.

Terry has been a magnificent servant for Chelsea but the captain who turned 35 on 7 December looks like he is feeling Father Time’s tap on his shoulder.

Throw in 31-year-old Branislav Ivanovic, a shadow of his former self this season, and you are left with a Chelsea defence in need of serious renewal despite the promise of Kurt Zouma, 21.

Mourinho recognised as much in the summer when Chelsea edged the bidding up towards £40m for Everton’s John Stones, only to be met with total resistance at Goodison Park.

They could, of course, return for Stones in January but Everton’s mood has not changed. The young defender is now firmly settled and is unlikely to want any potential upheaval anyway with Euro 2016 on the horizon.

The sight of Terry making his way to the bench so early on in the second half only emphasises the urgency of Chelsea’s defensive plight.

Stats you need to know

Leicester have scored in every Premier League game this season.

The Blues have lost 9+ of their opening 16 top-flight games for the first time since 1978-79, a season in which they were relegated.

Ninety-six teams have gained 15 points or fewer from their opening 16 games, 50 were relegated and the average finishing position of those 96 teams was 17th.

Leicester will have a further test of their title credentials in their next three games, away at Everton on Saturday, then a trip to Liverpool on Boxing Day before hosting Manchester City on 29 December. Chelsea host Sunderland and Watford before travelling to Manchester United on 28 December.
BBC