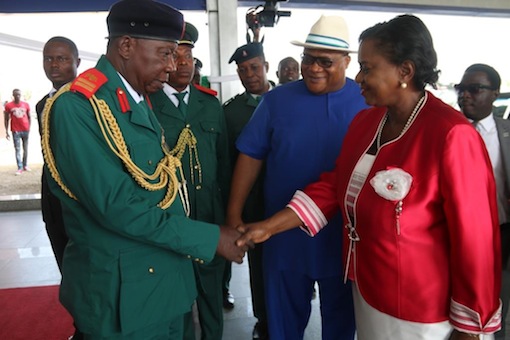 Nyesom Wike, Rivers governor has said his administration is committed to the welfare of Nigerian Legionnaires in the state.

The governor who stated this during the Emblem Appeal Launching marking the 2016 Armed Forces and Remembrance Day Celebration at the Obi Wali International conference centre, Port Harcourt donated N5 million to the legion.

Wike who was represented by his Deputy, Dr. Ipalibo Harry Banigo said the State Government will continue to do the needful to encourage the soldiers as well as sustain the families left behind by the fallen heroes.

He emphasized that government will support security agencies in order to guarantee the safety of the citizens while calling on well-meaning Nigerians to assist the Armed Forces.

“I therefore call on all well-meaning Nigerians to support the Armed Forces & Remembrance Day by donating generously towards the welfare of families of our fallen heroes and those serving in various military operations in Nigeria and other countries.”

Wike said the programme is to remember those who served in various peace keeping operations and those who paid the supreme sacrifice for the peace and stability of the nation.

He promised to address the challenges faced by the legionnaires especially in the area of agriculture which he said will add value to the agricultural development programme of the state.

Earlier, the Secretary to the State Government, Sir. Kenneth Kobani said the Emblem launch and Appeal fund support is intended to provide a forum for Nigerians and corporate bodies to appreciate the sacrifices of the gallant officers and donate generously to their welfare.

“Let everyone rise up and support those they left behind, their labour must not be in vain.” Kobani declared.

In his welcome address, the Chairman, Nigerian Legion, Col. Wilberforce Josiah, thanked the Rivers State Government for engaging the legionnaires to serve as Security Guards at the State Secretariat Complex, Port Harcourt since 1999.