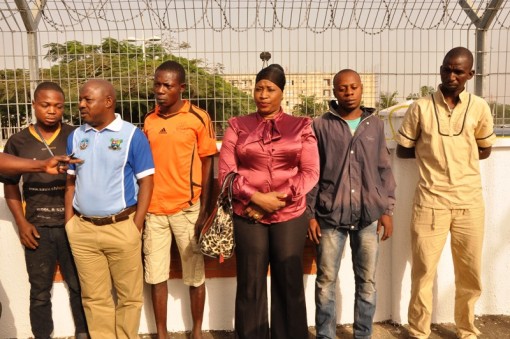 In line with the commitment of his administration to ensure law and order in the state, Governor Akinwunmi Ambode of Lagos State on Wednesday apprehended motorists, tricyclist and motorcyclists driving against traffic in Ijora Olopa area of the state in breach of the State Road Traffic Law.

The Governor’s convoy, which was driving from Lagos Island en-route Carter Bridge to Ikeja, also accosted some other motorists while committing the traffic offence on Apogbon Bridge.

While being questioned by journalists in Lagos House Ikeja, the offenders admitted to driving against the traffic and breaching the law, explaining that they were forced to pass one way due to traffic gridlock.

Sunday Izebor, a commercial motorcyclist from Edo State, said he was arrested while passing one way, and explained that it was not in his character to do so, but was forced to commit the traffic offense due to heavy traffic.

The driver of the PSP truck, Ogunwale Segun admitted that he drives against traffic to navigate the road on a daily basis.

He said: Ï wanted to park refuse in Ijora when I was arrested. The Lawma road was blocked so I had to pass one way and that was what made me to be caught otherwise I would not have been arrested.”

On her part, a lady who identified herself as Adejoke Elemoro said she passed through one way because she was in a hurry to catch up with a meeting scheduled for 7am in her office with a customer.

“I passed one way this morning when I was arrested. It is not that I did it intentionally but it was the naval officers in the area that directed me to pass one way. I left my house around 6am to catch up with the meeting and I had to pass one way because we have been facing serious traffic on that route since three months, and if not that, I will not meet up with my appointment,” she said.

Also, an interstate commercial bus driver, Ganiru Ayakunle said he committed the traffic offence because of his passengers who were rushing to catch up with urgent appointments.

A commercial tricyclist, Akinlabi Ahmed, who attacked a security detail of the Governor while attempting to arrest him, said he knew that by his action, he had run fowl of the laws of Lagos State.

Akinlabi, who hails from Oyo State, said Wednesday was the first time he would be committing such traffic offence.

The offenders have since been handed over to the Lagos State Task Force on Environmental Sanitation and Special Offences for prosecution.