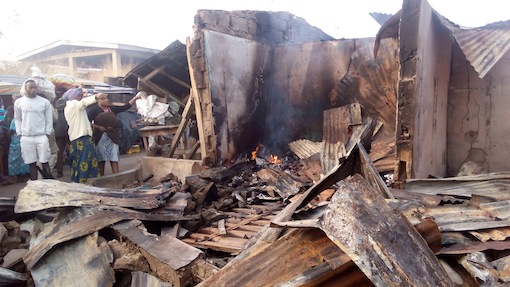 Properties worth over one billion naira were Tuesday night destroyed at the popular Kuto market in Abeokuta, the Ogun State capital, western Nigeria.

There was a fire outbreak in a part of the market where about 20 shops were burnt to ashes.

Hundreds of bags of rice, plastics, beverages, garri, yam flour are among the items burnt to ashes.

When our correspondent visited the market, traders and sympathisers were seen weeping and wailing and gnashing their teeth over the incident.

The cause of the fire could not be ascertained at the time of this report.

Some of the traders whose shops were burnt include Ireti Yusuf, Ronke Ojo, Wasilat Adeosun, Folake Agbaje, Femi Idowu among others.

Speaking with our correspondent, one of the affected traders who simply identified himself as Sola narrated how the incident happened.

According to him,”I received a call around 10:58pm (on Tuesday) that the market is burning and our shops are among those affected.

“I left my house at Ilogbo immediately in the singlet and boxer pant I was wearing and when I got to the market, I became helpless as I could not do anything to salvage the situation.

“Many people were around to assist us. It is a sad experience. The shops belong to Mama Azeez, a.k.a. Omojoyibo. We delivered about 400 bags of rice to the shop on Sunday and yesterday (Monday) again, another 150 bags were delivered in the shop.

“Now, we have lost all the 550 bags of rice. Owners of shops beside us also went to buy goods yesterday (Monday) for the Christmas festival. Like the plastic seller, she loaded two shops and another woman beside her who is selling pots, stoves and other household utensils had a full stock of goods in her shops.

“As I’m speaking with you, three of the shop owners here have been taken to various hospitals over the shock and right now, we don’t know their condition.

“Three trucks of water were here from the fire service station, but they could not stop the fire as it wreaked a lot of havoc.”

The Caretaker Chairman of Abeokuta South Local Government, Comrade Olusola Ekundayo, who visited the market to assess the situation told P.M.NEWS that investigation will be conducted to ascertain the cause of the incident and see how to assist the traders.

“It happened just last night and we are here today to assess the situation. I can’t say anything about the cause for now. We will investigate the matter and then know the next line of action,” Ekundayo said. 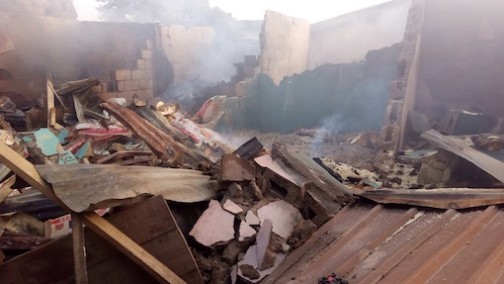 Also speaking with our correspondent, the Iyaloja of Kuto market, Chief Isiwatu Adewuyi expressed shock over the incident and called on the government to assist the victims recoup their losses during this festive period.

The DPO Ibara Police Command, Moses Aduroja, led his men to the market to see things by himself.

The police took records of the damaged items with pictures of the incident while names of the affected traders were taken.

They asked the affected traders to report at the station for further interrogation on the matter.

At the time of this report, people from evert part of Abeokuta were still trooping to the market to see the extent of damage caused by the inferno.

Meanwhile, another market in the town, Iberekodo market in the Abeokuta North Local Government Area of the state was also Tuesday gutted by fire
Items worth over N500,000 were reportedly destroyed.