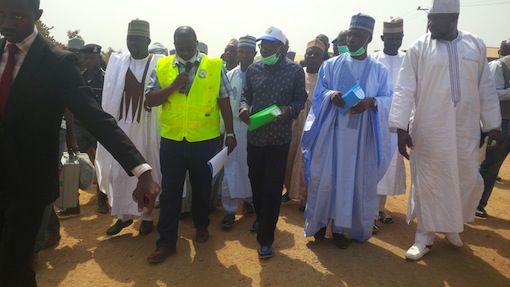 The Speakers of Kwara, Niger House of Assembly along with other members and Controller of Federal Ministry of Works in Kwara State, Engineer Omotayo Awosanya

The Speakers of both Kwara and Niger State Houses of Assembly, Dr. Ali Ahmad and Alhaji Ahmed Marafa have both called on the federal government to fix the Ilorin-Jebba road.

The duo led legislators of the two Houses of Assembly on a visit to the deplorable highway to share the pains and hardship being experienced daily by motorists plying the route.

They noted with displeasure that the highway linking the north and southern parts of the country had claimed many lives and crippled socio-economic activities of the two states due to its present deplorable condition, pointing out that no road was as bad as the highway in the country.

The Speaker of the Kwara State House of Assembly, Dr. Ali Ahmad in his remark lamented that all federal roads in Kwara state are in deplorable condition, saying that the state had been cut off from other parts of the country due to the bad roads linking the state and appealed to the Federal Government to urgently fix the highway and other federal roads in the state to fast track the socio-economic emancipation of Kwara.

Earlier, the Controller of Federal Ministry of Works in Kwara State, Engineer Omotayo Awosanya while briefing the legislators on the highway said the 96 kilometres highway asphalt overlay rehabilitation project was awarded to CGC Nigeria Limited at a cost of N14.5 billion in December 2013.

This, he said was occasioned by zero allocation for the project in the 2015 budget, thereby making 50 kilometres of the highway, which he described as Trans-Sahara road network to collapse and impassable for the road users.

He however disclosed that the contractor handling the project despite non release of outstanding payment by the federal government has agreed to return to site with the hope that the new leadership in the country would demonstrate greater political will to include the completion of the Trans-Sahara road network in the next year’s budget.

The Speaker of the Kwara State House of Assembly later presented a letter containing the resolutions of the House on the poor State of Ilorin-Jebba and Ajase Ipo-Offa-Erin-Ile- Osogbo highways to the Federal Controller of works in the State for onward presentation to the Minister of Works, Power and Housing, Babatunde Fashola.

Similarly, his counterpart from Niger State, Alhaji Ahmed Marafa presented their resolutions, calling on the Federal Government to urgently look into the deplorable condition of Federal roads in Niger State.