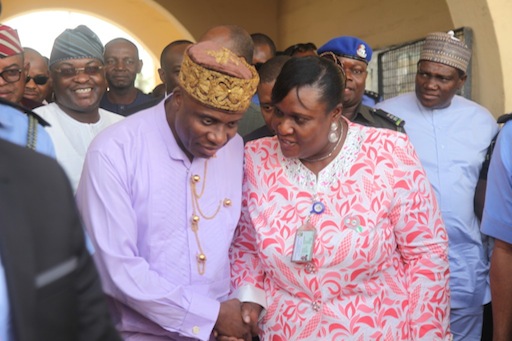 Minister of Transport, Rotimi Amaechi and representative of Rivers State Governor, Mrs Stella Ebere Wigwe at the commissioning of the Port Harcourt -Aba rail line on Wednesday in Port Harcourt

Rivers State Governor, Nyesom Ezenwo Wike has commended the Federal Government represented by Rotimi Amaechi for continuing with the revival of the railway transport system started by the previous administration.

In an address during the flag off of Aba-Port Harcourt railway line in Port Harcourt by the Minister of Transport who also happens to be the immediate past governor of Rivers, Rotimi Amaechi on Wednesday Wike said that rail mass transit will enhance the durability of Nigerian roads under pressure due to excess vehicular movement.

Represented by the Permanent Secretary Rivers State Ministry of Transport, Mrs. Stella Ebere Wigwe, Wike assured that he will always support the Federal Government in the execution of development projects.

Wike who prayed that the Federal Government will soon complete and commission the rehabilitation of the remaining segments around the country, said rail transport is a viable system of transportation to invest upon.

The Rivers State Governor, who remarked that rail transportation, is an affordable, safe, and fast means of moving bulky goods will also provide jobs for the teeming population of unemployed Nigerians and help reduce pressure on our roads.

In his address, at the flag-off ceremony which held at the Port Harcourt Railway Station, the Minister of Transport, Rotimi Amaechi said that political party affiliation had no place in infrastructural development.

“There is no party in development, just as we say the naira has no colour. There is no PDP, no APC”.

The minister said that the event was part of the Federal Government’s ongoing efforts and commitments to provide safe and affordable means of mass transportation in Nigeria.

According to him: “The Nigerian Railway Corporation has completed the rehabilitation of the Port Harcourt–Aba rail line B segment of the narrow gauge Eastern rail line from Port Harcourt to Maiduguri and the line is ready for commissioning and commencement of operations.”

The managing director and Chief Executive Officer of the Nigerian Railway Corporation, Engr. Adeseyi Sijuwade, said that the Aba–Port Harcourt Mass Transit Service was set up to facilitate business transactions between the Araria International Market in Aba and the Oil Mills, Mile 1 and Diobu markets in Port Harcourt.

He also said that the Mass Transit Train Service will reduce congestion on the Aba- Port Harcourt Express road.

The Chairman Senate Committee on Land Transport, Senator Gbenga Ashafa, described the service as a signpost of seriousness of the Federal government to reinvigorate the railsway systems in the country.