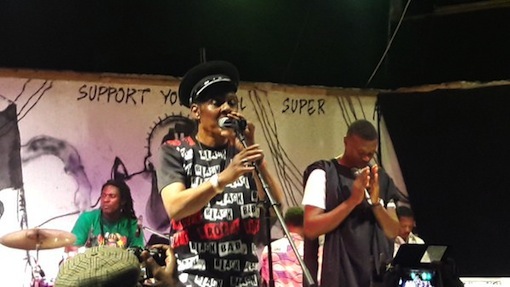 Last night Nigeria’s legendary reggae artist, Majek Fashek, graced the stage at the Afropolitan Vibes at Freedom Park in Lagos to the delight of his fans.

The show was his first since he left a rehabilitation centre in Abuja, Nigeria’s capital, where he was treated for addiction to drugs.

Fashek who looked healthier and fatter than he has been in recent years thrilled the crowd to some of his hit songs including Little Patience, Holy Spirit and Send down the Rain.

Here are reactions to Fashek’s show below:

Thanks again to everybody involved in bringing Majek Fashek back into shape. 🙏

God bless all those who spent their time, money & resources to rehabilitate this genius called Majek Fashek! He's sending down the rain now!

Majek Fashek took us down memory lane with Little Patience, Holy Spirit and Send down the Rain. #AfropolitanVibes pic.twitter.com/vTFniNSvHd

The Rainmaker is alive once again!!!!! Majek Fashek singing "send down the rain" here @afropolitanvibe #DiscoverFreedomParkLagos

Glad to see Majek Fashek back on stage 🙌

Road to righteousness is narrow while road to destruction is widely open – Majek Fashek. The legend of raggae

Listening to Majek Fashek holy spirit and the lyrics just kinda pulled me in. Am wondering how the man lost it.