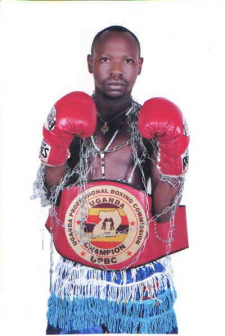 Kakembo, who has won all of his nine professional bouts, arrived with his manager, Paul Akoth, a Kenyan.

“I have trained so well for this fight to ensure that Skoro is beaten in front of his fans. His defeat will be my Christmas gift to Ugandans. I have seen the tapes of his fight and he will not go beyond round 5,” he boasted with eyes bulging.

His opponent, however, dismissed his boasts as impotent. “Kakembo cannot beat me. Never. He will not last the distance. Saturday is almost here and I will beat him so much that he will be afraid to come back and fight in Nigeria,” Skoro said.

Two other title fights will be staged at the event. Sadiq “Police Machine” Ahmed will defend his national welterweight crown against Olaide “Fijaborn” Fijabi, while Sunday “Capo” Olalekan will take on Stanley “Edo Boy” Eribo for the national light welterweight title. The fourth fight, a challenge bout, will be between Sunday “Golden Child” Ajuwa and Rasheed “Afonja Warrior” Abolaji.

The event, which kicks off at 5pm, is supported by MultiChoice, SuperSport, Newsbreak.ng, KSquare Security, Paragonis Multimedia Limited, Brilla FM, Bond FM and Complete Sports. The fights will be broadcast live on SuperSport in 47 African countries.