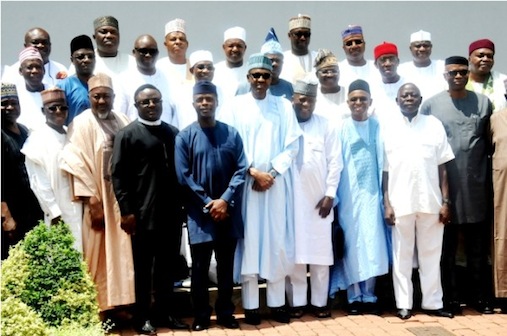 Nigeria’s dire economic situation and the near bankruptcy of many states were further underscored Tuesday with the amount available to be shared by all tiers of government.

The reduced income will only go further to worsen the capacity of many states to fulfil the most basic of their obligations: payment of civil servants salaries, not to talk about providing basic amenities for the citizens.

All the 36 states and Abuja will share just N70.7 billion. And this will further deepen the financial woes of the states.

Adeosun gave the figures when she addressed newsmen on the outcome of the Federation Accounts Allocation Committee (FAAC) meeting in Abuja.

The N369.9 billion shared comprised the month’s statutory revenue of N297.4 billion, VAT of N61.1 billion, an exchange gain of N4.9 billion and a N6.3 billion refund by the NNPC.

The local governments, she said, received N54.5 billion, amounting to 20.60 per cent of the amount distributed.

She said that N25.6 billion representing 13 per cent derivation revenue was shared among the oil producing states.

According to her, this showed a decrease of N11.3 billion and N114.2 billion from what the country generated as mineral and non-mineral revenue in the preceding month.

She stated that the balance in the Excess Crude Account was static at $2.25 billion since July.

Adeosun decried the low revenue generation for the month. She explained:

“Ongoing maintenance and the shut-down and shut-in of production for repairs and maintenance at different terminals during the month continued to impact crude oil and gas revenue negatively.

Adeosun, however, stated that there was distribution of 150 million dollars being Liquefied Natural Gas (LNG) dividends, adding that it had previously been approved by the National Economic Council (NEC).

She said that the increase in non-oil revenue was a sign that the economy was already showing non-dependence on crude oil alone.

Adeosun said the administration had continuously emphasised diversification of the economy and that it was on track to ensure that.

“Even though the revenues for the month are actually down, if you analyse it, non-oil revenue is now really making a difference compared to oil.

“Non oil is beginning to pick up and play its part and I think that for our economy, that is a very positive sign and I think that it is something we should work together with, to ensure that people are paying and remitting tax when due.

“We should improve collections in those non-oil revenue generating agencies, because those revenues are not as volatile or subject to oil price.

“They are most sustainable and those are the signs that we are looking for, that those non-oil revenues should be more stable and significant and to keep growing. So, that is our policy direction,” she said.

On salaries before the yuletide as promised by the Federal Government, she said that salaries were already being paid.

“The issue that is very important is that of salaries and people are being paid now as we speak and are already beginning to get alerts.

“We are conscious enough to ensure that people are paid in time for the festive season and I know that the Director of Funds is nodding emphatically that alerts are already going out,” she said.