Is Ronaldinho heading to the premier league? - P.M. News

Is Ronaldinho heading to the premier league? 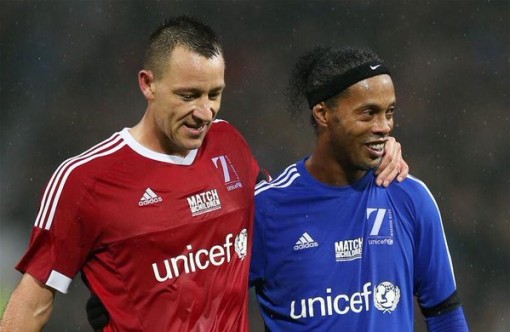 John Terry and Ronaldinho shares a joke during a charity match

Former Brazil forward Ronaldinho, 35, has received offers from English clubs, according to his brother and agent.(Times- subscription required)

West Ham are willing to sell striker Andy Carroll for £18m, with Sunderland and Newcastle interested in the 26-year-old. (Mirror)

Lokomotiv Moscow striker Oumar Niasse, 25, is set for a move to the Premier League this month, with Chelsea, Manchester United and Tottenham among the clubs interested in signing the £15m-rated Senegal international. (Guardian)

Manchester City have been told Schalke midfielder Leroy Sane, 19, would cost them at least £40m. (Sun)

Leicester City will offer England striker Jamie Vardy a new contract in January that will more than double the 28-year-old’s wages. (Mail)

Midfielder Marouane Fellaini, 28, will not leave Manchester United in the January transfer window, according to manager Louis van Gaal. (Sun)

Stoke boss Mark Hughes has ruled out the prospect of Bojan Krkic leaving Stoke in January, saying there is no buyout clause in the 25-year-old’s contract.(Mail)

Arsenal have recalled Germany Under-21 midfielder Serge Gnabry from his loan spell at West Bromwich and will instead loan the 20-year-old to a Championship club. (Telegraph)