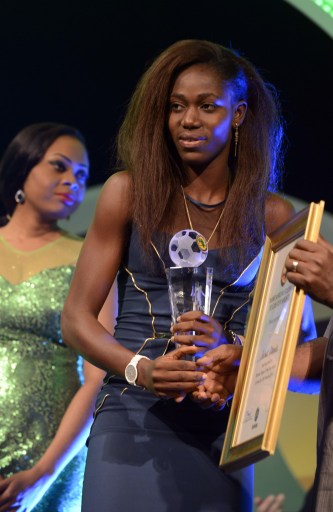 Asisat Oshoala with her trophy

Football lovers across the world will watch the glamorous 2015 Glo-CAF Awards live on their television sets.

The event sponsor and next generation network, Globacm, said arrangements had been concluded for television stations such as Africa Independent Television (AIT), SuperSport, Canal 2 and Sport 5 to broadcast the awards live from the venue, the International Conference Centre in Abuja.

Globacom said the live broadcast would enable people all over the world to watch how Africa honours its illustrious sons and daughters who have distinguished themselves either as players or administrators in the last one year.

“We recognize that not everyone would be able to attend the show. The live broadcast will, therefore, enable those who are not at the venue to watch the show from the comfort of their homes or offices. We want Africans and other football lovers to be able to share this glorious moment with us. The event will start at 6 p.m., while the live telecast will commence on the mentioned stations from 9pm to 11 pm Central African Time,” the company explained.

Already, the Federal Capital Territory is abuzz with excitement as top football celebrities led by the the acting President of FIFA and President of Confederation of African Football, Alhaji Isa Hayatou, as well as leading entertainers scheduled to perform at the show have arrived in the city.

A major highlight of the evening will be the crowning of African Footballer of the Year. The three players in contention are Pierre-Emerick Aubameyang of Gabon & Borrussia Dortmund of Germany, four-time African Player of the Year, Yaya Toure of Cote d’Ivoire and Manchester City, and Andrew Ayew of Ghana and Swansea City FC.