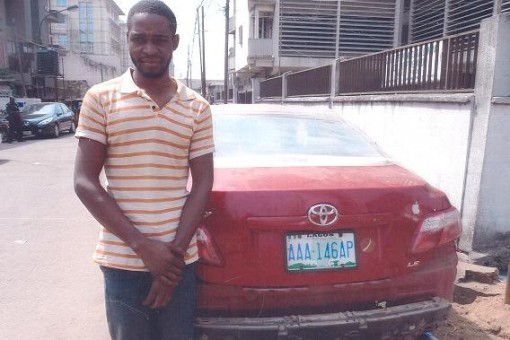 A Suspected car thief, Mathias Isa with the Toyota Camry car he allegedly stole from Marina car park in Lagos. IN Abuja Toyota and Mazda cars are targets of thieves

The police at the Lion Building Division, Lagos Island, western Nigeria, have arrested a suspected car thief, Mathias Isa, 28, in Kogi State with the Toyota Camry 2007 Model car he allegedly stole from the Marina car park on Lagos Island.

The police alleged that the incident occurred on 27 November, 2015 when the owner of the car, Mr. Olatunde Idris Ibikunle drove the car with registration number AAA 146 AP and parked it a Marina car park after which he dropped the car key with the security guard at the park.

Police said as soon as the car owner left the park to buy something nearby, the suspect approached the security guard with the car key and lied to him that he was the driver to the Toyota car owner and that the owner called him on phone and asked him to drive out the car to pick him along Marina street.

The security guard, according to the police, believed him and handed the car key over to him.

The suspect drove the car out of the park and headed straight to his village in Ayingba area of Kogi State to look for a buyer for it.

Nemesis caught up with the suspect when he was arrested by the police in Kogi State while driving the car around to look for a buyer.

During interrogation, according to investigation, the suspect allegedly confessed to the police that he stole the car from a car park in Lagos to sell and use the proceeds to solve his family problems.

Following his alleged confession, the police in Kogi State sent a signal to the Lagos State Police Command about the incident and the DPO in charge of Lion Building Division, Lagos Island, CSP Anthonia Tamaruno, despatched a team led by Corporal Gboyega Oyeniyi to Kogi State to bring
the suspect and the stolen car back to Lagos.

After investigation, the suspect was arraigned before a Tinubu Magistrates’ court, Lagos on a one-count charge of felony to wit, stealing.

The accused however pleaded not guilty to the alleged crime, and Chief Magistrate Mrs. K. B. Ayeye admitted the accused to bail in the sum of N500, 000 with two surties in like sum.

Ayeye adjourned the case till 2 February, 2016 for mention while the defendant was taken to Ikoyi prison, Lagos, pending when he will fulfill his bail conditions.