My re-election saved the Ijaw nation, PDP from ridicule - Dickson 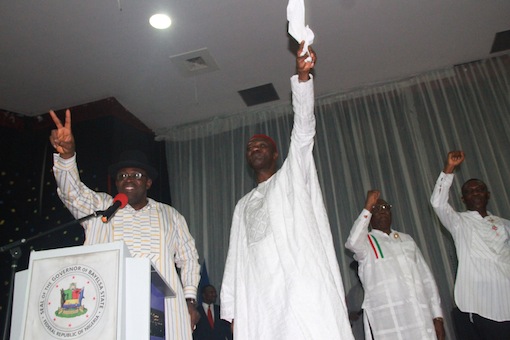 Bayelsa State Governor, Seriake Dickson on Wednesday said his re-election did not only save the Ijaw nation and the Peoples Democratic Party (PDP) from ridicule, but also proved abortive all efforts aimed at turning Nigeria into a one party nation.

Dickson, who spoke during a meeting with his political appointees at the Banquet Hall of Government House in Yenagoa, said the victory of PDP at the state governorship election has put to rest, all speculations and propaganda that the party was disintegrating into insignificance.

He stressed that, despite the setback, the party suffered at the immediate past general elections, the PDP has what it takes to recapture power at the center in 2019 and render better grassroots-oriented leadership to the people of Nigeria.

Dedicating his electoral victory to God, the governor was full of appreciation to all the appointees and Bayelsans for their resilience and support in the face of what he described as an “all-out war” unleashed against them by the main opposition party, APC.

“I am aware of what you all went through. And all of us know what the entire state experienced. In all our political lives, we have not seen an election like this, where the full weight of the arsenals that they had was brought on us in your polling booths, communities, wards, local governments and across the whole state. We saw it.

“We heard about it and felt what they did. I want to congratulate all of you and the good people of our state for their resilience and standing up for what was right.

Dickson sympathised with families who lost their loved ones to the election, assuring them of government’s support and determination to explore every available legal avenues to ensure that all those who planned, sponsored and executed violence that resulted in the destruction of lives and property before, during and after the election are brought to justice.

He added that, the state government would not hesitate to seek redress at appropriate international organisations over the brutal attacks on the innocent people of the state, if justice is not adequately administered on the matter.

According to him, “We’ll leave no stone unturned to ensure that all those who planned, sponsored and executed this brutal act will not go unpunished. We will surely bring them to book using all available legal means even as far as going to relevant international organizations so that it will serve as a deterrent and forestall any recurrence in our future political experience.

Dr Ojougboh particular eulogised Bayelsans for their doggedness in resisting all the attempts made to rig the election, noting that, the victory of the PDP in the state has further rekindled hope that, the party would bounce back to power in the country’s next general election.

Earlier in his welcome address, the Special Adviser on Political Matters, Hon Fyneman Wilson explained that, the meeting being the first to be convened after the state governorship elections, was to provide a platform for the Governor acknowledge and appreciate the efforts of all political appointees, who demonstrated true faith and loyalty throughout the electioneering period.