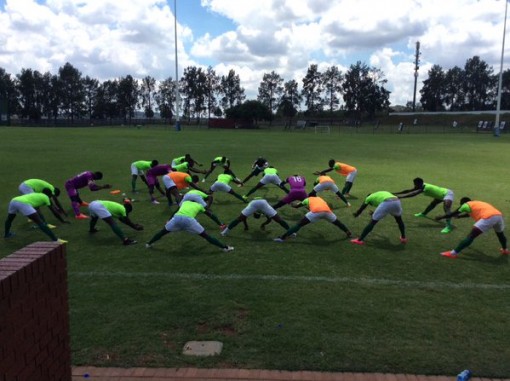 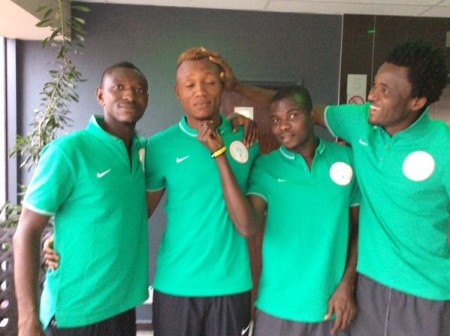 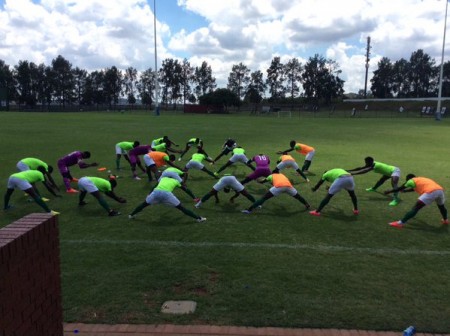 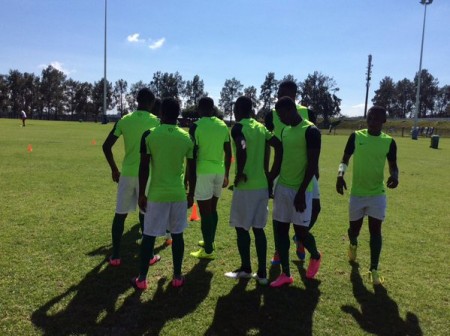 Nigeria’s home-based Super Eagles will leave their Pretoria, South Africa camp for Kigali, the capital city of Rwanda, Friday as they begin their participation at the African Nations Championship (CHAN) which kicks off Saturday, 16 January.

The CHAN, the first edition which took place in Ivory Coast in 2009, is characteristically African. It is contested among national clubsides and exclusively brings together players that play in their national championships. Players who are playing abroad, in or out of the continent, are not eligible to take part in the tournament.
.
Thursday, 14 January is exactly a month when the Nigerian team opened their camping for the tournament, the first which started in Abuja before moving down to Pretoria on 2 January in a bid to experience the same high altitude the same as the one in Kigali.

The Nigeria’s Home-Eagles coaching crew and other delegation of 39 people are expected to lodge at the four-star Hillview Hotels and Apartments in Kigali.

According to the travel schedule released by the Confederation of African Football (CAF), the delegation will arrive in Kigali at 2pm aboard a Rwanda Air plane.

The Team’s Coordinator, Patrick Pascal, said the Eagles are ready for the tournament after a month of intensive training, adding that the friendly games against two CHAN-bound teams, Angola and Ivory Coast were good tests to prepare the players for the competition.

“I believe that we will all smile at the end of this championship. The atmosphere in camp is very good, the spirit is high, the players are ready. I’m happy that there is no injury worries,” Pascal said.

Lobi Stars of Makurdi player, Samson Gbadebo, who could not travel with other players to Pretoria because of visa hitches, is now with the team.

The twitter handle of the Super Eagles announced the arrival of Gbadebo, who is fondly called Mr. Reliable early on Thursday.

“At last, @LobiStars’ Mr Reliable’ Samson Gbadebo joins the team’s Pretoria camp and the boys were happy to see him,” it was tweeted.
Nigeria came third in the last edition of CHAN held in South Africa under erstwhille coach, Stephen Keshi.

CHAN starts on Saturday with 16 teams participating. Nigeria’s group opponents Tunisia and Guinea will also arrive in Kigali on Friday, while Niger will land on Thursday.

From eight participants during its first edition, CHAN moved directly to 16 at its second edition, played in Sudan in 2011. Since 2014, at its third edition in South Africa, the competition was recognised by FIFA, which has added it to the competitions that are considered when setting up FIFA classification.

Meanwhile, the host of the 2016 African Nations Championship (CHAN 2016), Rwanda, said it is ready ahead of the tournament’s kick off date.

“We are fully ready to host this high-level competition,” CAF website quoted Vincent Nzamwita, president of the Rwanda Football Federation to have said. He added that “it is a great honour to host the tournament from 16 January to 7 February.”

The Rwandan government has spent 16 billion Rwandan francs ($21.4 million) on infrastructure and organisational costs for CHAN 2016, the fourth edition of the competition since 2009.

The 16 competing nations are divided into four groups: Group A is composed of Gabon, Ivory Coast, Morocco and Rwanda; Angola, Cameroon, the Democratic Republic of Congo and Ethiopia make up Group B; Group C comprise Guinea, Niger, Nigeria and Tunisia and Group D is made up of Mali, Uganda, Zambia and Zimbabwe.

In the opening match on Saturday, Rwanda’s Amavubi, meaning “Wasps” in the Kinyarwanda language, play the Ivory Coast’s Elephants.