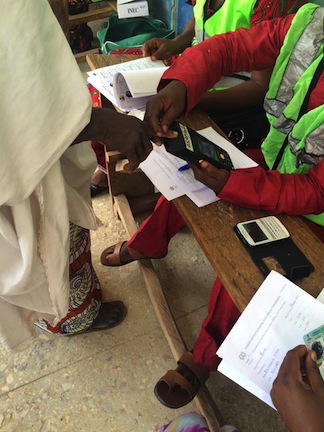 A correspondent of NAN who monitored the exercise reports that eligible voters came out in large numbers to register at the registration centres.

Mr Segun Adewole, a civil servant, who was at the Government Day Secondary School, Karu, a registration point under the Abuja Municipal Area Council (AMAC), commended the INEC officials for conducting the exercise in an orderly manner.

Adewole said that INEC officials also came to the centre early enough. “It was an uphill task trying to control the large crowd that came out to register today, especially at the initial stage

“What the INEC staff did was to attend to the first batch of people and give number to the remaining people on the line to be attended to later in order not to make the exercise rowdy,” Adewole said.

At the Karu centre, Mr Abdullahi Musa, a businessman said that the exercise was an improvement on the previous one.

“I tried so many times during the last registration but I was not successful; today, I have been lucky.

“It took me just about five minutes to complete my registration,” Musa said.

Other respondents also called on INEC to create more registration centres to enable many eligible voters to register within the available time for the exercise.

Mrs Mercy Adejo, a teacher, said it was unbelievable that there was only one registration centre in Karu.

“I came all the way from Jikwoyi Phase 4 to register here because this is the only registration centre within the environment.

Friday also stressed the need for INEC to set up more registration centres.

Meanwhile, some residents of the territory said they were not aware that CVR was going on in the FCT.

In a statement, FCT Resident Electoral Commissioner (REC), Prof. Jacob Jatuh called for the support of stakeholders to ensure success of the exercise.

Jatuh said that the Commission had approved five Direct Data Capture Machines (DDCMs) in each ward for smooth conduct of the exercise.

Jatuh said that the technical members of staff were also deployed to rectify and resolve any technical challenge that may arise.