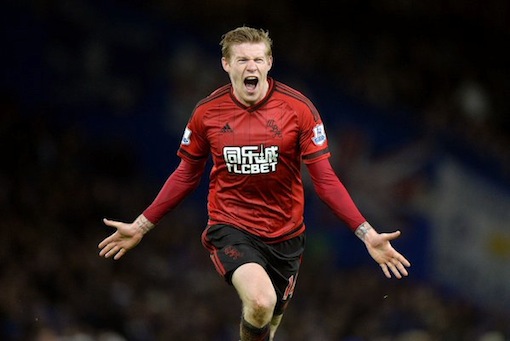 James McClean’s late equaliser earned West Brom a share of the points as they refused to accept defeat at Chelsea.
The Blues went ahead when Cesar Azpilicueta turned in fellow full-back Branislav Ivanovic’s low cross.

But when the home defence failed to clear McClean made them pay with a pinpoint low shot into the corner.

The Republic of Ireland international’s leveller was the final twist in an often ill-tempered game with Chelsea striker Diego Costa at the centre of several flashpoints, including a confrontation with several West Brom players after the final whistle.

After only four goals in his first 21 games of the season, Costa has come to life in the wake of Jose Mourinho’s departure as manager – doubling that tally in his past four appearances.

But, even at his best, the Spain international bristles with aggression as well as attacking threat.

From gliding past Jonny Evans and rifling over the top in the first minute, he was never far from incident – exchanging words and clashing shoulders with Jonas Olsson and Claudio Yacob and picking up a booking himself for a crude challenge on Craig Gardner.

He forced Boaz Myhill into a sprawling save with his side 2-1 up deep into the second half, but he could not deliver a third goal that would have killed off the contest and wrapped up the points.

Chelsea’s title win last season – in which they were out-scored by second-placed Manchester City – was based on a steely defence.
But that, along with many other aspects of their play, has deteriorated sharply this term.

Despite the imposing pairing of John Terry and Kurt Zouma at centre-half, supported by 6ft 6in goalkeeper Thibaut Courtois, the hosts never looked comfortable when the ball was played into their box from out wide.

After allowing Craig Dawson and McClean to win headers in dangerous positions earlier in the match, their lack of conviction was punished as McClean threaded an 86th-minute shot into the bottom corner after a bout of penalty-area pinball.

That goal – combined with Pedro’s cheap concession of possession and Zouma’s failure to close down Gardner for West Brom’s first – will give Blues interim boss Guus Hiddink plenty to muse on as he tries to shore up his rearguard and Chelsea’s position in the table.

-Baggies pull away from the basement-

After their Boxing Day defeat by Swansea, West Brom were just three points from the relegation places, but home wins against Stoke and Newcastle followed by this point at Stamford Bridge have improved that cushion.

Tony Pulis’ tactics – his side have played the highest proportion of long passes in the top-flight this season – have been criticised, but his record of never having been relegated as a manager looks unlikely to be spoiled by this typically well-drilled and solid Baggies side.

Salomon Rondon, well supported by McClean, was a willing runner in attack and the proceeds from the potential sale of the unsettled Saido Berahino might yet fund an evolution in the Baggies’ style.