Benin City, the capital of Edo state literally stood still Friday as the ancient city turned the nation’s football capital city, when top dignitaries in the nation’s football converged to pay their last respect to Kate, wife of former captain and chief coach of the Super Eagles, Stephen Okechukwu Keshi, who died of cancer.

Speaking at the event, Mr. Ilaboya, described the death of Kate as a loss, not for the Keshi family alone but for the entire football family in Nigeria. ‎

“I think it is a great loss, not just to the FA but to the football community in Nigeria. We are talking about the wife of former Super Eagles coach. He was captain at junior and senior levels. In fact, he was the longest serving captain. He became the only Nigerian coach to have won the Nations Cup as a captain and as a coach.

Shaibu said Kate would call them to encourage whenever they had difficulties during their days in national team.
‎
Also speaking, a former Nigeria Football Federation, NFF, Secretary general, Barr. Musa Amodu, while sympathising with Keshi and family, described Kate’s death as “a big loss” to the Keshi family and‎ for the entire Nigeria football family. ‎

“We want to pray to Almighty God that he accepts her soul in eternal rest and we do sympathize with him [Stephen Keshi], for what has happened. That’s why we are all here to honour him and show our solidarity in his time of loss.”‎

Speaking in the same vein, Austin Eguavoen, a former coach of the Super Eagles, described Kate as “a wonderful person,” adding: “she is very close to my family. To buttress that, my wife was her Chief Bridesmaid at their white wedding in Belgium. And then to tell you how close we are, she is a god mother to my first daughter. She is a lovely somebody and we are going to miss her.”‎

A former Chief Coach‎ of the Super Falcon, Godwin Izilien, said Kate Keshi’s death calls for sober reflection for him.

“You can imagine staying together for many years and a separation now has come. I sympathize with Keshi and I pray that God Almighty gives him the strength and courage with his family to stand the test of time.‎”

Husband of the departed, Stephen Keshi, who spoke in low tone, described his late wife as “a unique wife,” and “a wife that every man would love to have.”

He thanked his friends, colleagues in the soccer business and all Nigerians who stood by his family both physically and in prayers during their trying period. 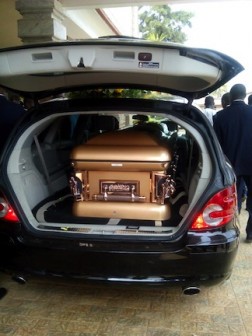 “I am honoured that they took out time despite their busy schedule to come and give their last respect to my wife. Most of them have been with my wife, they knew her and probably that’s why they are here. I thank them and every other person, the press, and all Nigerians who were in prayers with my family. I am grateful,” ‎he said.

Born on 17 September, 1962, the late Kate Keshi, a graduate of Nursing from the University of Phoenix, USA and mother of four, died on 9 December, 2015, in USA where she was based, haven battled cancer for several years.‎

She was ‎laid to rest at her husband’s house at Ugiokhuen Quarters, Ugbor, GRA, in Benin, after a ‎requiem mass held at St. Paul Catholic Church, Airport Road. ‎

The event was attended by family members and friends, including government officials, football administrators and sports journalists.‎
‎
‎