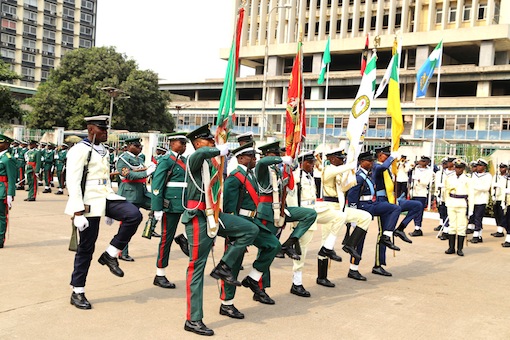 March past by the military at theTafawa Balewa Square parade ground in Lagos
Photo: Idowu Ogunleye

Governor Okezie Ikpeazu of Abia has urged Nigerians to reflect on the sacrifices of fallen heroes who laid their lives for the unity of the nation.

He enjoined Nigerians to stand on the legacies left behind by the nation’s war veterans to produce socio-economic advancement.

The governor said that it was a day to remember those gallant military men who laid down their lives for the survival of Nigeria.

Ikpeazu urged Nigerians to live the exemplary lives of our fallen heroes as well as show solidarity with the nation’s Armed Forces.

He said that the state government would ensure that all that would be required for the building of a standard Cenotaph was provided.

His Edo counterpart, Adams Oshiomhole, said that there was need to constantly show appreciation to the Armed Forces’ efforts by celebrating them and recognizing them.

Governor Oshiomhole, who said this at the 2016 Armed Forces Remembrance Day celebration in Benin on Friday, noted that over the years, the Armed Forces had made unquantifiable sacrifice to ensure peace and security reigned in the country.

He said that there must be commitment to respect not only members of the Armed Forces still alive, but also the fallen heroes.

He pledged N10 million to support the Nigeria Legion.

He urged the legion to support families of deceased officers, adding that the sacrifices and contributions of the Armed Forces could not be overemphasised.

The governor said that in spite of the dwindling revenue of the state, it was committed to assisting the legion because of its members’ enormous contributions to the nation.

Oshiomhole also promised that the state government would train the orphans of the fallen heroes.

Earlier, the Chairman of the Nigeria Legion, Edo Chapter, retired Col. Osawaru Awanbor, appealed to the state government to re-instate 636 members of the legion who were formerly employed by it.

In Akwa Ibom, the Nigeria Legion, Eket chapter, commended President Muhammadu Buhari over the payment of pension arrears owed members of the union in the state.

The Chairman of the Legion, retired Maj. Joseph Esu, made the commendation during the Armed Forces Remembrance Day celebration in Eket Local Government Area.

He said that the Federal Government had begun the quarterly payment of the outstanding pension arrears of the Nigerian Legion in the state.

“Before the end of the year, the present administration will complete the payment of the arrears to legionnaires in the area.

“We commend the federal government for the prompt payment of pension and all other efforts to reposition the Nigerian Legion at all levels,” Esu said.

The chairman urged the federal government not to relent in its efforts to support the Armed Forces to defeat the Boko Haram insurgents.

“We commend the gallantry of the Nigerian Soldiers who in spite of all odds are destroying the bastions and strongholds of the Boko Haram insurgents,” he said.

Meanwhile, the Nigerian Legion, Ebonyi chapter, has appealed to the state government to release the N15 million grant approved for it by the previous administration in the state.

The Chairman of the chapter, retired Group Capt. Osmond Ogah, made the appeal in an interview with NAN in Abakaliki on Friday.

He spoke at the sidelines of the 2016 Armed Forces Remembrance Day celebration.

NAN reports that every Jan. 15 is dedicated to the remembrance of military men and women who died in active service.