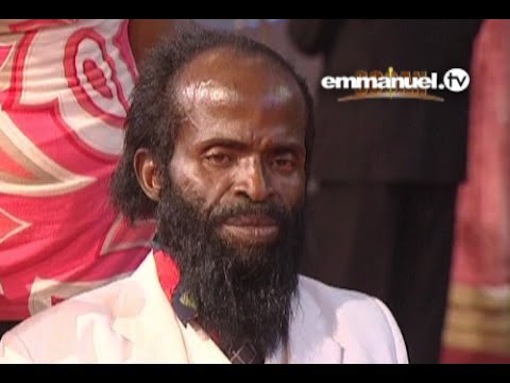 The video titled ‘Face To Face With Lucifer’ shows a peculiar scenario that unfolded in Joshua’s church when a self-professed ‘occult wizard’ came to seek prayers at The Synagogue, Church Of All Nations (SCOAN) in Lagos, Nigeria.

In the clip, an eerily looking man with a menacing black beard introduces himself as Professor Chukwudi Okakpu, an alleged ‘Grand Llama of Science Beyond Material’.

Amidst his extraordinary claims, the Satanist professed to have had face to face encounters with ‘Lucifer’ and to have endorsed ‘anti-Christs’ globally.


“I can stay here and appear in any part of Europe,” Okakpu, dressed in a flowing white suit, calmly stated, adding that, he ‘operates like a spirit’.

“If you are such a person that patronises shrines or herbalists, I am the ultimate,” he sensationally claimed.

The video shows Joshua praying for Okakpu who sways uneasily several times before eventually falling to the floor.

Several of his ‘followers’ proceed to come out from the crowd and are also prayed for, after which the ‘professor’ renounces his devilish past.

Okakpu proceeds to return the following week with some of his ‘occultic’ garments to testify to the changes in his life after ‘accepting Jesus Christ’.

“This is a video satan does not want you to watch,” Emmanuel TV states in its introduction of the clip on YouTube. “A satanic ‘general’ renounces his covenants with devilry and witchcraft in a church service that made hell and its minions quiver!”

As with most of Joshua’s videos, the contents have elicited controversy with opposing views as to its authenticity.

Several online commentators insisted Joshua’s deliverance services are nothing more than a scam involving arranged actors while others argue they are genuine and godly.

Joshua’s YouTube channel Emmanuel TV, where the clip was uploaded, is the third most subscribed channel in Nigeria with nearly 300,000 subscribers and 110,000,000 views.