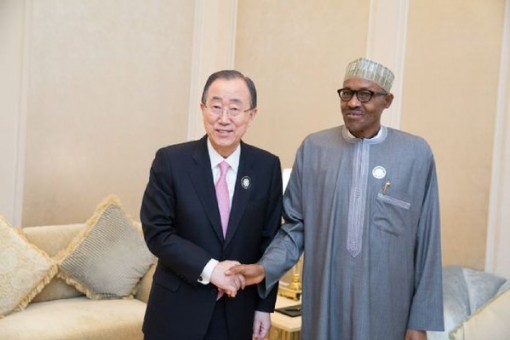 President Muhammadu Buhari said Monday in Abu Dhabi that Nigeria has made very significant progress towards ending the Boko Haram insurgency since his assumption of office on May 29, 2015.

Speaking at a meeting with the Secretary-General of the United Nations, Ban Ki Moon on the sidelines of the World Future Energy Summit, President Buhari said that in collaboration with the Multinational Joint Task Force, the Nigerian Armed Forces have driven the terrorist group from Nigerian territory into “fall-back positions”.

“They are currently not holding any territory today as we speak, “the President told Mr. Ban Ki Moon.

President Buhari also told the United Nations Secretary-General that Nigeria will persistently pursue global action to reverse the drying up of Lake Chad and save the lives of those who depend on it for survival.

“With all due respect to our neighbours, Nigeria has been worst hit by the drying up of the Lake Chad and we are hoping that the global community will support the process of halting the drying up of the lake, ” President Buhari said.
Mr. Ban Ki Moon commended the President for his courage in fighting terrorism and corruption.

The Secretary-General said that Nigeria has made amazing progress against terrorism since President Buhari assumed office, while the President’s war against corruption has boosted global confidence in the Nigerian economy.