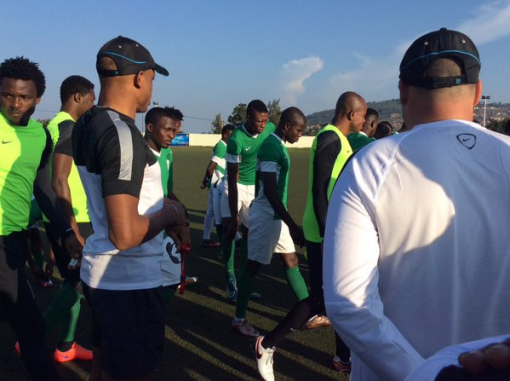 Nigeria’s Super Eagles Team B have assured that their first match in the ongoing Rwanda 2016 African Nations Championship (CHAN) is a must-win for them.

Nigeria take on their counterparts from Niger Republic in Kigali on Monday evening at the Stade Regional de Nyamirambo.

Team Coordinator, Patrick Pascal informed that the spirit is high in the Nigerian camp with the players ready to prove their worth against the Mena of Niger, adding that there is no injury worries ahead of the clash.

“The visit of Sports Minister, Solomon Dalung and the members of Executive Committee of Nigeria Football Federation, NFF, led President Amaju Pinnick to our camp on Sunday has boosted the morale of the players. The players were greatly excited and we are looking forward to the match with all sense of patriotism to do the nation proud.

“I want to assure Nigeria that winning the threae points at stake in this first match of the CHAN is non negotiable. We are battle ready,” Pascal said.

Chief Coach Sunday Oliseh said that though the match will be tough, the ambition of the players going into the clash is to win.

“Niger are not going to be easy but we are equal to the task. The plan is to take each match as it comes,” Oliseh said.

Media Officer, Oluwatoyin Ibitoye corroborated Pascal and Oliseh’s stance, saying that the home-based Eagles have resolved to start the championship on a winning note.

He added that the dinner promised by the Nigerian High Commission in Kigali for the team has equally motivated the players to go for victory against Niger.

According to Ibitoye, the players, who have not had a taste of Nigerian food since they arrived Kigali on Friday, were promised a treat of Nigerian delicacies by the High Commissioner after the match Monday night.