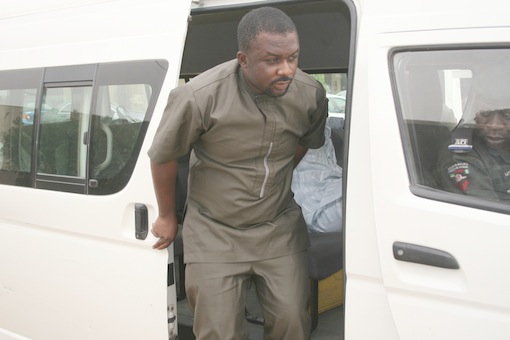 …another suspect for N15m Dud Cheque

The Economic and Financial Crimes Commission (EFCC) today arraigned the duo of Sani Endurance and Hilary Odo before Justice A.O Onovo of Enugu State High Court, Nsukka on a 22-count charge bordering on conspiracy forgery and stealing to the tune of N10.3 million.

The suspects allegedly conspired among themselves and reactivated three accounts belonging to customers of a new generation bank without the customers’ consent and diverted the funds for personal benefits.

They both pleaded not guilty to all the charges preferred against them.

In view of their plea the prosecuting counsel Michael Ani asked for a date for trial. M.A Ayamanbhor and Onodima Mathias, counsel to the first and second accused persons respectively, applied for bail of their clients on the ground that the accused had been on an administrative bail since 2013 and did not jump bail.

The accused persons were admitted to bail in the sum of N1million each and one surety in like sum. The sureties are to produce 3 years tax clearance and two passport photographs each. The matter was adjourned to February 8, 2016 for commencement of trial.

In a related development, one Abel Charles alongside his company AB 08 Nigeria Limited were also arraigned today before Justice Nuhu Y. Galandanci of the Kano State High Court on two counts of issuance of dud cheque to the tune of fifteen million Naira.

The accused allegedly defrauded one JALCOP Nigeria Limited the sum of N 15,000,000 meant for the supply of 20 trucks of black oil to Sokoto Cement Company. He only delivered one truck and when the complainant asked for a refund, he issued five cheques to the tune of N 15,000,000.00 which was returned unpaid on the ground of insufficient funds standing to the credit of the drawer.

The accused however pleaded not guilty to charge, prompting the prosecution counsel, Douglas Gift to urge the court to fix a date for the commencement of trial.

Justice Galandanci however admitted the accused to bail in the sum of N200, 000 with two sureties who must be resident in Kano state.