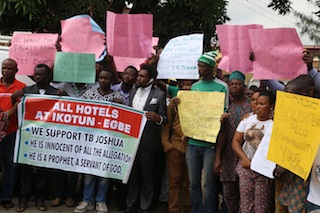 Paul Iyoghojie
The police at Ikoyi Division, Ikoyi, Lagos, southwest Nigeria, have arrested a security guard, Isaac Onoja, 22, for allegedly conniving with his accomplice now at large to rob his employer, Prince Hilary Unachukwu, of $1.5m (about N285.5m).
The incident, according to the police, occurred on 13 December, 2015, at Ojora Road, Ikoyi, Lagos.
The alleged accomplice approached the security guard and bribed him with N30,000 to allow him rob his employer with a promise to share the stolen money with him after the operation.
The security guard, according to investigation, collected the money and on the day of the incident he allegedly opened the gate of his employer’s house for his accomplice to gain entrance into the apartment.
The two suspects reportedly locked the complainant up with a padlock inside a room, ransacked his bedroom and allegedly succeeded in stealing the follars from the wardrobe of the complainant and escaped.
Unachukwu, it was learnt later raised the alarm after the suspects had escaped which attracted neighbours who reportedly use instruments to break the door and rescue him.
The complainant reported the incident to the DPO in charge of Ikoyi Division, SP Tijani Mustapha who directed his men to trace and arrest the suspects anywhere they may be found.
The security guard was arrested at a hideout in Lagos while his accomplice is still at large.
The security guard from Benue State was arraigned before an Igbosere Magistrates’ Court in Lagos on a five-count of felony to wit, failing to protect his employer from external attack and stealing.
Police Prosecutor, A.C. Osuji said the offences are punishable under sections 404, 285 (1) (8), 39 (1), 408 and 270 of the criminal laws of Lagos state 2011.
The accused pleaded not guilty to the alleged crime, and Magistrate Mrs. S. K. Matepo admitted him to bail in the sum of N500,000 with two sureties in like sum.
Matepo adjourned the case to 10 February, 2016 for mention while the defendant was taken to Ikoyi Prison, Lagos pending when he will fulfill his bail condition.