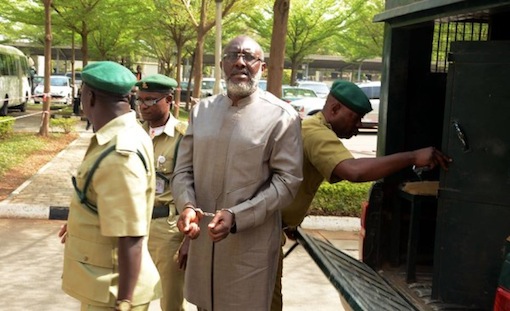 The Coalition Against Corrupt Leaders (CACOL) says the handcuff of the spokesperson of the Peoples Democratic Party, PDP, Olisa Metuh by the Economic and Financial Crimes Commission (EFCC) to court on Tuesday was in order, saying that corrupt leaders should be treated in the same way.

The body described as distractive, the dust being raised by some individuals and groups over the appearance of Metuh in handcuffs at the Federal High Court in Abuja for the hearing on his application for bail following his arraignment on seven counts of money laundering against him by the EFCC.

The Executive Chairman of CACOL, Mr. Debo Adeniran, stated that “Olisa Metuh’s appearance in handcuffs at the hearing is in line with standard procedure and has not violated the constitution in anyway. What we are witnessing is the attempt to whip up sentiments and empathy in favour of corrupt elements that have over time drained the Commonwealth of the Nation with rabid and bare-faced impunity.”

CACOL according to the Chairman has consistently called for the naming, shaming and nailing of corrupt leaders and individuals irrespective of religious, ethnic, political and social inclinations, saying that “as a result, we welcome the development as it tallies with the strategy of the organization in battling corruption.”

Adeniran called for diligent prosecution of all corrupt persons such that convictions of those found guilty could be achieved to serve as deterrent to others.

“It is an open secret that these corrupt individuals have at their disposal, ill-gotten gains with which they can pay for legal services of the cleverest lawyers who can wriggle through the labyrinth of the litigations to escape justice. With prudent, diligent and thorough investigations and prosecutions, we can win the battle against corruption.

“Those raising the question of differential treatment in the handling of persons on trial for corruption should note that Metuh was reported to have been recalcitrant, unrepentant, unremorseful, and un-cooperative to the extent of tearing up his own written statement when he was been interrogated, it is only wise for all agencies involved in his case to take precaution based on discretion and the suspect’s attitude which clearly was that of arrogance and being above the law.

“The PDP Spokesperson’s case cannot be compared with that of some suspects that cooperated with investigating agencies, volunteered information and demonstrated remorse. And come to think of it, he is not the only public figure that has been cuffed during trial processes, examples are former Governor of Kogi State, late Abubakar Audu, in 2013 over a case of 10 billion naira fraud and Alhaji Tafa Balogun, a former Inspector General Police, in 2005, who was also cuffed during his trial following his attempt to escape justice by jumping down from the moving van that was conveying him to remand. In any case no known law has been violated in this case,” the CACOL Chairman explained.

According to Adeniran, “It is our desire to see the agencies treat all suspected corruption criminals in the same way in order to send appropriate message to innocent Nigerians that corruption is a shameful act. This is in line with CACOL’s perpetual advice through its pay-off line – name, nail, shame and shun corrupt leaders anywhere, everywhere.”