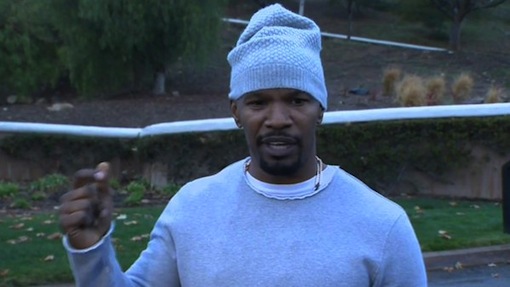 Jamie Foxx says it was not a heroic act

Jamie Foxx swapped Hollywood action for some real life stuff when he pulled a motorist from the wreckage of his burning pickup truck after he crashed outside the Oscar winner’s mansion in California.

Brett Kyle’s vehicle flipped over several times after it hit a drainage pipe on Potrero Road on Monday night.

The actor heard the explosion and rushed to rescue Kyle before the truck was engulfed by flames.

Speaking to CBS Los Angeles, Foxx said: “I don’t look at it as heroic. I just look at it as, you know, you just had to do something. And it all worked out.

Foxx – helped by another passerby – used a pair of scissors to release Kyle from his seatbelt.

Kyle’s father, Brad Kyle, turned up at the scene to thank Foxx for saving his son.

Choking back tears, he said: “It doesn’t matter to me who it was, what they do for a living or whatever – just the idea that someone would do that is so much more than I can fathom.”

“He didn’t have to do anything,” Mr Kyle added.

“I think we all hope we can do something when the time was there, but the question is do we? Do we act or do we fear for our own lives? And he did not – he acted.”

Mr Kyle’s son is being treated for head, chest and neck injuries. He was also arrested on suspicion of driving under the influence.