M-Net, Airtel give Nigerians The Voice 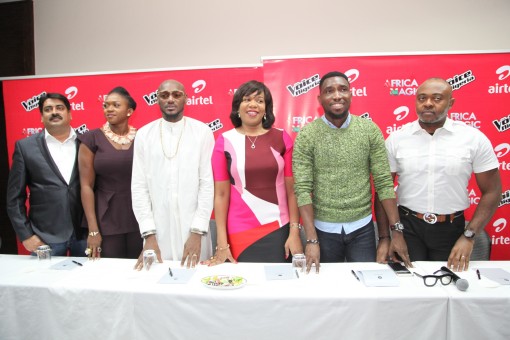 Finally, the global music talent hunt franchise, The Voice, is set to roll in Nigeria with the unveiling of leading Nigerian vocalists, 2Face Idibia, Waje, Timi Dakolo and Patoranking as its coaches.

The announcement of the coaches, which held in Ikoyi, Lagos on Tuesday, came on the heels of the talent auditions in Calabar, Port Harcourt, Abuja and Lagos.

Speaking at the unveiling event, Wangi Mba-Uzoukwu, Director, M-Net West Africa, said The Voice is an internationally-renowned franchise which has consistently provided exciting television content whilst giving great opportunities to talented individuals to showcase their talent to the world.

“The Nigerian adaptation will be no different and our viewers can expect the best television entertainment even as we wait to discover the next generation of talented singers,” Mba-Uzoukwu said.

The show, to be aired on Africa Magic, is being sponsored by Airtel.

Speaking on the partnership, Ahmad Mokhels, Chief Commercial Officer, Airtel, said the telco is committed to seeking partnerships that will empower talented Nigerians, especially young people and also bring joy, laughter and happiness to the homes of Nigerians.

“As the smartphone network, Airtel is passionate about innovative initiatives that will empower and enrich the lives of Nigerian youths. Airtel is positioned as the mobile internet service provider of first choice for Nigerian youths and we shall continue to support programmes that will connect more young Nigerians to their dreams,” Mokhels said.

Since its original launch in 2010, The Voice has gone on to win over audiences in countries like the US, Australia and the UK, where renowned artists including Adam Levine, Blake Sheldon, Christina Aguilera, Shakira, Tom Jones, Pharrell Williams, Kylie Minogue and Ricky Martin have occupied the show’s famous red chairs as coaches.

The Voice Nigeria employs the same format including a panel of four coaches who critique the contestants’ performances.

The coaches guide their teams of selected artists through the remainder of the season whilst also competing to ensure that their act wins the competition.

All the coaches on the maiden edition have some affinities with the title sponsor, Airtel. Lead coach Tuface is an Airtel Brand Ambasssor. Timi Dakolo was the winner of Idol West Africa brought to Nigerians then by Celtel now Airtel, while Waje was the second runner-up in Advance Warning, another music talent content brought to Nigerians by Zain now Airtel.