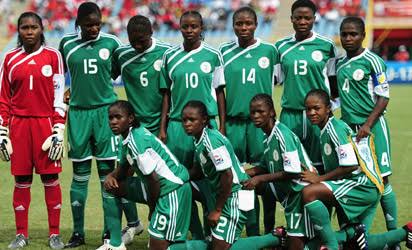 Nigeria’s U-17 women’s tam, the Flamingoes have vowed to leave nothing to chance as they confront Namibia’s Gladiators in the 2016 FIFA U-17 Women’s World Cup qualifier on Friday.

The Flamingoes have arrived in Namibia ahead of Friday’s match with a determination to ensure they beat the Namibians who had tasted a 4-0 defeat in the first leg of the qualifier played in Abuja about two weeks ago.

Nigeria’s captain Rasheedat Ajibade, who scored two of the four goals in the first leg, said: “We are confident that we will progress into the last round of the qualifiers. Though, we will not under-rate the Baby Gladiators.

“Our Coaches have been telling us to forget the result of the first leg and play the second leg match as if we lost the first leg. Our spirit is high and we will do the country proud.”

The Flamingoes have never failed to qualify for the FIFA U-17 World Cup finals since the event was launched in New Zealand in 2008.

Officials of the Namibia Football Association have confirmed that the second leg match will take place at the Sam Nujoma Stadium, starting from 4pm Namibia time (3pm Nigeria time).

The winner of this fixture will play South Africa’s U-17 girls, who have reached the final round of the qualification series following the withdrawal of Zambia.

This year’s FIFA U-17 Women’s World Cup will take place in Jordan between 30 September and 21 October.