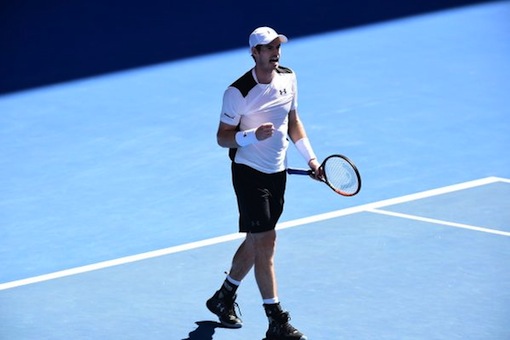 Britain’s Andy Murray swept past home hope Sam Groth to reach the third round at the Australian Open.

Groth, 28, has the fastest serve ever recorded to his name at 163mph, but was broken in his first four service games as Murray totally dominated.

Murray, 28, moves into the last 32 where he will face Portugal’s Joao Sousa for the third time in four years.

In their first singles meeting, Groth quickly discovered that his huge serve made barely a dent on the Murray return game.

After just 30 minutes Murray wrapped up a first set that was characterised by return winners and unplayable lobs from the Briton, and not one ace from the Australian.

Groth finally delivered his first ace after 36 minutes, only to drop serve again moments later, and there were 43 minutes on the clock when he finally got the scoreboard moving to trail 6-0 3-1.

There was a brief respite for the world number 67 as Murray’s level dropped long enough for him to be pegged back to 4-4, but another run of games – this time five in a row – saw the four-time finalist regain control.

Groth’s situation was so desperate that he challenged his own serve after sensing another Murray return heading his way, but it was overruled and he was broken for a seventh time.

With Murray serving for victory, the Australian then twisted his ankle reaching for a low ball and looked in real pain as the Scot sealed victory.