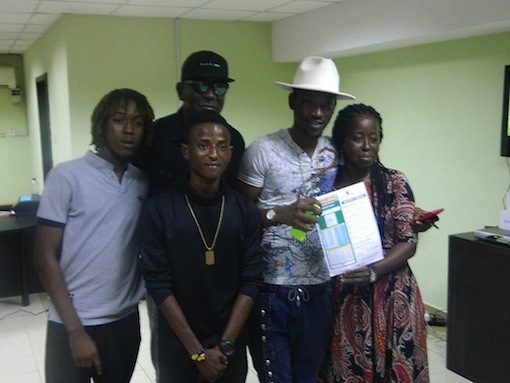 Ahead of 6 February date for the Access Bank Lagos City Marathon, Nigerian singer, composer and performer, Oyindamola Johnson Emmanuel, popularly known as Dammy Krane has joined the list of celebrities that will participate in the epic race.

Dammy Krane registered to run in the 42.195 kilometers race, which will take all the participants from the Old Lagos (National Stadium, Surulere) to the New Lagos (Eko Atlantic City).

Krane, who is known for his melodic voice, engaging lyrics and his exciting genre of African alternative music, stormed the Teslim Balogun Stadium office of the Local Organising Committee (LOC) of the event with some of his his aides to sign the dotted line signifying his intention to be one of over 50,000 marathoners, from home and abroad, coming for the one day race in Lagos.

The Nigerian pop music idol, Dammy Krane, is coming on board just as the organisers scored another first as transponders imported for the race arrived Lagos.

The transponder, also called chip timing, was introduced to marathon and road races over a decade ago.

The device, which is also used by bikers and tri-athletes, has since been developed into a supplement to traditional race timing techniques at long distance events across the world.

Interestingly, the transponder is extremely precise and capable of addressing several weaknesses that are inherent to traditional timing methods.

Its timing systems require that athletes wear a small, lightweight chip that uniquely identifies them as they cross strategically placed electronic mats.

The chip is typically worn on the shoelace or on an ankle bracelet, depending on the system being used.

In its most basic and common form, chip timing electronically handles the task of collecting and processing results at the end of the race. More advanced chip timing setups can protect against cheating, record accurate split times, provide instantaneous race updates, and compensate for slow starts caused by crowded starting areas.