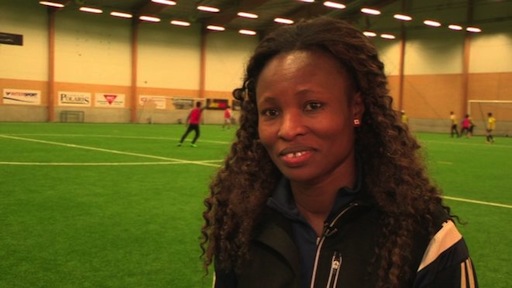 Nigerian football star Perpetua Nkwocha knows what it’s like to find yourself many miles from home, making a new life.

Her playing career took her from Nigeria to China and then to Sweden – where she has been based in the northern town of Skelleftea for more than seven years.

Now the multiple African champion and African Women’s Footballer of the Year is helping others who have made a very different journey, to the same destination.

She is player-coach for a local team, but much of her spare time this winter is being taken up coaching a group of Afghan teenagers, some of the hundreds of young migrants who have arrived in the town in recent months.

“I feel that it’s similar – which is why I have to try to make them happy, because I know where they came from,” she told the BBC.

“I feel so glad that I connected with them and we started this project together.

The project, which has only been running since November, was set up by her club, Clemensnas IF, in co-operation with the local football association and the Swedish church.

“It is really a way of giving these immigrants and refugees something to do during the day,” said Jens Karlsson, the chairman of Clemensnas.

“If they love soccer they can come here and practise with Perpetua, who is a great soccer player – so that’s the purpose of the whole thing, to help in the immigration of these guys.”

The enthusiasm of the youngsters, many of whom travelled alone from Afghanistan, is plain to see as they get stuck in to their drills – under the watchful eye of their illustrious trainer.

It is far from clear if the boys are aware of the stature and achievements of the player who is putting them through their paces.

But if they can’t list Nkwocha’s titles and trophies, they certainly recognise her qualities, even if at the start some were apparently surprised to be coached by a woman.

Now there are no such doubts.

“She’s a good coach, we’re all happy,” Habibullah told the BBC – before excitedly outlining plans for a team being put together once the group has settled in.

Migration is as controversial an issue in Sweden as it is elsewhere across Europe – but the local authorities in Skelleftea, who support the Clemensnas project, are adamant that they need people to come to the town, and make their life there.

“We have a problem with people moving away – down into the big towns in the south,” local councillor Daniel Adin told us.

“[For] many of our smaller towns and villages, they see this as a way to keep the countryside alive.”

And he is a keen supporter of using the football scheme to try to bring the new arrivals into society.

“We have seen that sport is a really simple way of creating these meetings between people, because you don’t have to know the language – you can meet and have a natural way of communicating and meeting.”

Nwocha says she enjoys her life in Skelleftea, people are friendly – it is just the cold that is difficult.

“You cannot get used to this weather. There is no fashion in winter,” she says, adding that layers are imperative.

She has a busy life, attending classes to improve her Swedish – as well as the teenage-coaching project.

Her main role will be to lead Clemensnas to success once the season gets going again in May.

But the so-called “Football for All” scheme is close to her heart – and she is putting just as much effort into that at the moment.

“I feel so great being with these lovely children here,” she said.

“I feel like I’m home, you know – just like when I train my boys back home in Nigeria – I feel the same way here.”