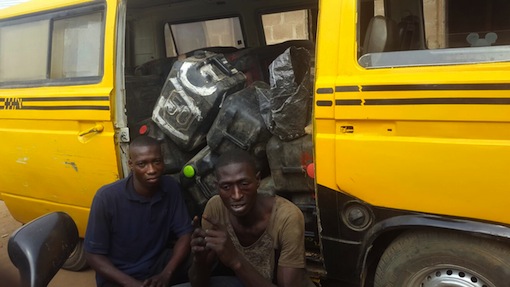 Two suspected pipeline vandals were arrested by the police detectives attached to Ogijo Division of the command on Wednesday.

The suspects were arrested at Agbowa area in Ogijo, Sagamu local government area of Ogun state.

The duo are Olamilekan Omoga and Musiliu Atowu, both of Agbowa area.

They were arrested with a Vago bus with 44 (forty four) 50 litres jerry cans of Premium Motor Spirit, PMS.

According to a statement released on Thursday and signed by the State Police spokesman, DSP Olumuyiwa Adejobi, the operation, which was led by the Divisional Police Officer, DPO in charge of Ogijo Division, acted on a tip off that some vandals were operating in the area and were able to arrest them.

The State Commissioner of Police, CP Abdulmajid Ali has directed that other members of the gang be apprehended without delay and thorough investigation be carried out on the case.

Ali, who was represented by the Deputy Commissioner of Police and second-in-command in the Ogun State Police Command, DCP Celestine Okoye, has also assured the good people of the state of adequate protection of lives and property and full enforcement of all laws of our land.