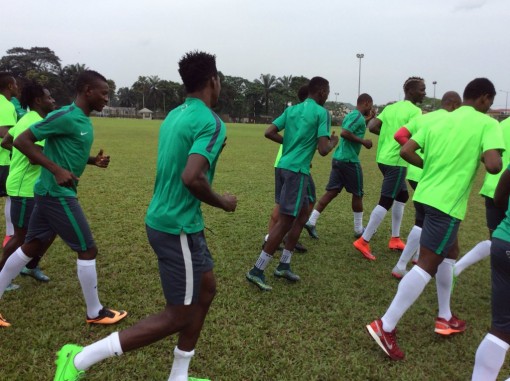 Super Eagles during a training session

It will be the battle of the Eagles today at the Stade de Kigali in Rwanda as Nigeria’s Super Eagles B tackle Tunisia’s Carthage Eagles in the second match of Group C.

An outright win by Nigeria will move them into the quarter –finals of the 4th African Nations Championship, to join hosts Rwanda and DR Congo who have qualified from Group B and Group A. Angola team have been eliminated already.

Centre referee for the Nigeria-Tunisia match will be Joshua Bondo from Botswana. He will be assisted by Oamogetse Godisamang, also from Botswana and Mothibidi Stevens Khumalo from South Africa.

Kick off for the crucial match will be 3pm Rwanda time, which is 2pm Nigerian time, according to CAF online. Niger and Guinea will play at 7pm.

Bronze medallists of the last edition, the Eagles started the championship with a 4-1 romp over Niger Republic and are expected to start on Friday from where they left off on Monday.

A hat –trick by Chisom Chikatara and one by Osas Okoro condemned the Mena to a poor start in the campaign, and shot the Eagles to top spot, after Tunisia and Guinea battled to a 2-2 draw.
The North Africans won the 2011 edition of the competition in Sudan five years ago.

Goalkeeper Ikechukwu Ezenwa is expected to start, with Etim Mathew, Kalu Orji, Stephen Eze and skipper Chima Akas in the defence, and Paul Onobi, Usman Mohammed and Ifeanyi Mathew in midfield. Osas Okoro, Chisoma Chikatara and Prince Aggrey are likely to be in attack for Nigeria.

A win will guarantee Nigeria’s place in the last eight, ahead of their last Group C match against Guinea in Gisenyi on Tuesday.