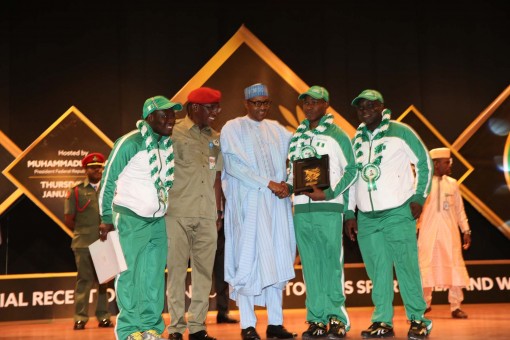 Festus Allen, a former Coach of 3SC FC of Ibadan has commended President Muhammadu Buhari for fulfilling his promise to the 1985 squad that won the maiden FIFA U-17 World Cup.

Buhari at a ceremony in Abuja also honoured members of the D’Tigress team that won the African Basketball Championship and the medallists at the 2015 All Africa Games.

The president honoured them for doing the country proud in their respective sports.

Allen said that the president’s gesture would prompt present sportsmen and women to intensify their effort when representing the country.

“It a great development and the president should be commended for fulfilling his promise, especially to the 1985 squad.

“Other athletes that have done the country proud and have yet to be recognised or rewarded should not give up, their rewards will come someday,” he said.

Kamiludeen Banjo, the national coach of the deaf football team, praised the president for honouring the former footballers.

Banjo urged the president to continue to extend the gesture to other athletes that won laurels for the country.

Feyisetan Are, a powerlifting coach, who also spoke to NAN in Lagos, expressed delight at the reward.

Are, however, described the reward as a “dream come true”, noting that it would go a long way to add value and happiness to the life of those who benefited from it.

“The government has done very well by remembering and rewarding athletes that have served and brought honour to the nation.

“It shows that, their labour for the nation is not in vain, however, they should invest wisely and should not misuse the money,” he said.

Toyin Aluko, a board member of Handball Federation of Nigeria (HFN), said that the reward was a welcome development that would inspire young athletes.

“Most people are happy, particularly the footballers but the significant thing is that our young athletes will be inspired, knowing well that their record will be revisited one day,” she said.

Aluko said she was thrilled by the fact that after 31 years, the government had to remember and fulfilled its promise to reward the footballers.

Also a recipient and a professional cruiserweight boxer, Olanrewaju Durodola, commended the president for the gesture.

He said the gesture would spur him to perform better in future competitions.

“I am so happy with what the president has done. I thank the God Almighty for taking me this far.

“After winning the title on Nov. I last year, I was promoted by the Inspector-General of Police (I-G), Mr Solomon Arase, from Constable to Inspector.

“After the pronouncement by the president today (Thursday), the IG also announced my promotion to an Assistant Superintendent of Police.

“I am so thankful and grateful for this development. This promotion showed that my efforts are being appreciated.

“I promise to use this as a motivation to win more fights for the nation,” he said.

NAN reports that the boxer got N1.5 million for winning the fight in Russia.

The president had said that the reward to the athletes was not payment for their services to the country but a token of appreciation from the country.