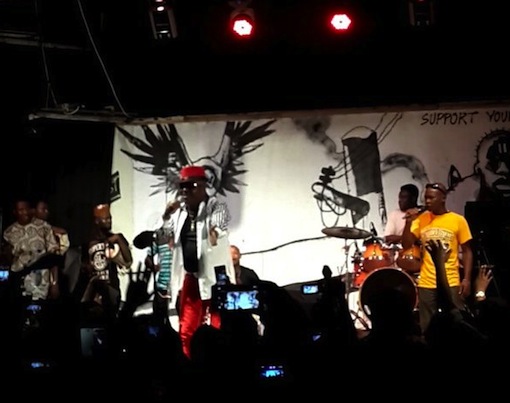 Sir Shina Peters performing to the delight of the crowd

Its not impossible that even the Queen of England is pondering knighting Shina Peters for real after his breathtaking performance at the Afropolitan Vibes held at the Freedom Park in Lagos, Nigeria.

After his performance, ‘Legendary’, was the word flung around to describe and explain his showing, put simply, Shina Peters rolled back the years in style.

His performance was so smooth and unforgettable that Twitter users caught the bug and were given a glimpse of the action they missed via Vine.

No doubt, Shina Peters has gone from the days of wearing shoulder pads and exuding athleticism but even with his protruding belly, he showed he was a real talent.

Here’s what people have to say about him on Twitter:

Sir Shina Peters is a legend!

You can't hear Sir Shina Peters music and not want to sing along or do his dances. Afro Juju Shina

For those of you that don't know Sir Shina Peters.. he's was the 2face, Wizkid and Davido your moms were tripping for in those days

You guys may not understand; Sir Shina Peters rolled back the years!!!!

Freedom park live! Sir Shina Peters is a living legend..Makes one wonder if wizkid or davido will be able to hold a concert 20years from now