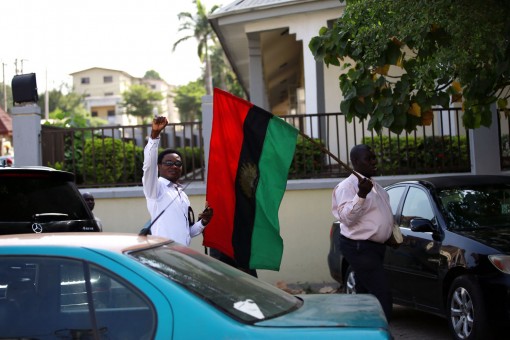 Rivers State Police Command has denied the arraigning 10 pro-Biafra protesters half naked in court as illustrated in some online publications with false photographs.

The Rivers Police Command in a press statement issued by DSP Ahmad Muhammad, Police Public Relations, PPRO, said “It is instructive to state categorically that the pictures displayed along the news item did not emanate from the Command. We are known for the respect and dignity given to suspects. A close look at the horrible pictures indicate that the people therein are more than ten as against the number stated in the news item.

According to the Police Command “The Rivers State Police as a responsible agency has never at any time paraded suspects in such a dehumanizing manner let alone arraigned them before a court of law like that. The Command viewed such publication as malicious and inept journalism.”

The Command enjoins members of the public to disregard and discountenance the pictures.

It would be recalled that the Command has on Wednesday January 20, 2015, arraigned 10 pro-Biafrans before magistrate courts 7 and 14 in Port Harcourt on two charge of criminal conspiracy and treasonable felony.