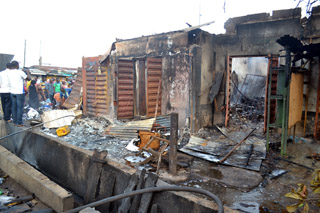 Shops burnt by the fire

Eyewitnesses said more than 200 shops with assorted goods worth millions of naira were lost to the fire.

The intervention of local fire fighters was said to have prevented the fire from spreading to residential houses around.

It was learnt that the fire, which started around midnight, was suspected to have been caused by high voltage from the power grid.

A source confirmed that the fire started midnight due to a surge in power supply, which caused the sparks that eventually consumed the market.

Sapele modern market was recently renovated by the state government after a protracted battle by traders over its relocation by the government.

The Police Public Relations Officer in the state, Mrs. Celestina Kalu, who confirmed the incident, described it as unfortunate and painful.

She said the fire could not be put out before the arrival of the state fire service.